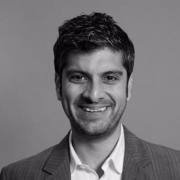 Saneel has a prestigious career as a digital leader, having won an array of awards like Webby’s, Cannes Lions, Effies and One Show Pencils. He has helped numerous major companies like Samsung and PepsiCo to innovate and adapt to the current technology-driven business reality.

An innovative and interdisciplinary professional, Saneel is the Founder of Finch15 – a company that helps mature brands to concept, prototype and launch revenue-producing digital businesses. He also founded “Greatest Good”, a non-profit platform where people donated their time to raise money for charitable causes.

Prior to launching Finch15, Saneel ran the North American division of BBH Labs, the innovation unit of Bartle Bogle Hegarty. Before BBH, he was Managing Partner at Denuo, a Publicis Groupe company focused on innovating digital services, media and technology.

Saneel has a BSc Degree in Advertising from the University of Texas, School of Communication. He started his career as an Associate Media Director at Starcom IP before moving to Play - Denuo Group and later working as VP and Creative Director at Denuo/Leo Burnett in Chicago. Among his accolades, he was featured in Ad Age’s 'Twentysomething', called by MediaWeek a 'Non-Traditional Media Allstar' and has received awards by the American Advertising Federation’s Advertising Hall of Achievement, Most Contagious Awards and MAIP’s Paragon Award.