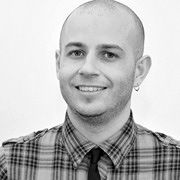 Roberto is the Founder and CEO/CCO of Flag in Brazil: a network of creative companies conceived to help  people and brands to discover, improve & transform their realities. Flag has recently won 4 prizes for mobile projects and, like Cubocc, is part of the Interpublic Group.

Roberto has worked in the digital communication sector since1995, having directed and executed the creative and technological elements of the projects he has helped develop. Over the course of his career, he has founded four companies (AG2, RAGE, SANT.AT & CUBOCC) all of which became standards in the segment. He has received awards in Communication both in Brazil and internationally; and has given talks and served as jury member at some of Brazil’s most important Communication events. He has worked in partnership with major agencies in Brazil and globally, as well as a number of major clients, such as Universal Mccann, Initiative, DM9DDB, Saatchi&Saatchi, Unilever, Google, Pepsico, Nike, J&J, Nokia, Toyota and Inbev, to name a few.