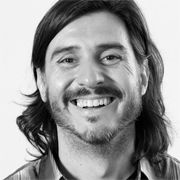 Part-owner and Executive Creative Director of Lola/Lowe Madrid, Chacho aims to make his new agency a leader in creativity as well as maximize its financial potential. With a long and distinguished history in the advertising industry, Chacho brings to the agency his reputation, which includes winning 11 Cannes Lions in one year, as well as the drive to create a company that meets the challenges of the 21st Century.

Throughout his career in the industry, Chacho has won more than 250 awards from all of the most important festivals including Cannes, Clio, One Show, D&AD, Eurobest and dozens of others. In recognition for his many awards, he was made a member of the selected World Creative Council of Leo Burnett.

As with any master of his craft, Chacho is still eager to learn. “I want to come to the Berlin School of Creative Leadership, because I want to continue learning,” he said. “Mostly I consider myself self-taught, but I didn’t wanted to miss the opportunity to learn from the very best people in the industry and other related areas. Very close friends have recommended the School, and I think that now is the right moment.”

Chacho graduated in Social Communications at the Juan Agustin Maza University of Mendoza.