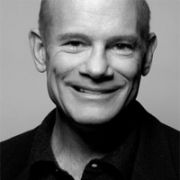 As the Berlin School of Creative Leadership Class 11 Godfather, Bill Roedy brings with him a wealth of experience and educational inspiration.

Roedy was most recently Chairman and Chief Executive of MTV Networks International (MTVNI). A dedicated internationalist and music lover, Roedy was the architect of MTVNI’s successful localization model, which empowered the local operations to embrace both commercial and artistic autonomy, while finding the right balance between local andinternational content. It is this pioneering strategy of respecting and reflecting audience diversity through local language, music and fashion that led to MTV Networks’ rapid global expansion – throughout Asia-Pacific, Europe, Africa, the Middle East and Latin America. Under Roedy’s leadership, MTVNI developed and launched hundreds of channels, starting with MTV Europe in 1989. He worked on making MTV available in East Berlin and celebrated with Europe when the wall came down. He and his team built a global operation that now includes over 172 locally programmed and operated TV channels outside the US in more than 162 countries in 33 languages, reaching a potential audience of two billion people, making MTVNI the largest networks in the world. His book, What Makes Business Rock, details his experience in expanding a corporation and gives advice to executives and aspiring executives in creative companies.

Before joining MTV in 1989, Roedy was Vice President, Affiliate Operations Manager of HBO. He completed his Bachelors in Science at West Point and then served with the Airborne, Ranger and decorated combat service where he received the Bronze Star, Air Medal, Meritorious Service Medal and the Vietnamese Cross of Gallantry (with Silver Star). He also served as a commander of three NATO Nuclear Missile bases in Italy. He received his MBA at Harvard University.

Roedy is now an active philanthropist who dedicates much of his time promoting global health and AIDS education. As an independent Board Member at Gavi, the Vaccine Alliance, he supports the organisation's work to protect children's lives through immunisation.