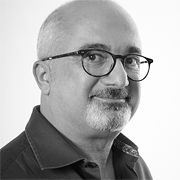 Youssef El Deeb founded and was chairman of Takhayal Entertainment, an entertainment company in Cairo and Dubai. One of the films El Deeb produced, ‘Ass We Lazk', won the Best Film Award at the 2006 Cairo International Film Festival. While there he also produced the first and only Arabic language family entertainment feature film in the last twenty-five years. The TV channel he founded at Takhayal, the popular Fatafeat TV, the first food channel in the Middle East, was sold to Discovery in late 2012.

Originally from Alexandria, El Deeb grew up in Canada, where he studied Fine Arts at the University of Victoria, and Film at Ryerson University. He has written and directed more than 150 TV commercials for major brands. Before he founded Takhayal Entertainment, he was the Head of Production and Programming for MBC Group and in was also the Head of the main channel, MBC1. El Deeb wrote and directed 'Love's Improvisations' a feature film that premiered at the Dubai International Film Festival 2012.

El Deeb came to the Berlin School of Creative Leadership to learn how to create more impact with his work. “This is the challenge for me and for us in this industry: how to explore new ways to entertain and inform our audiences. How do we add value beyond the entertainment.”