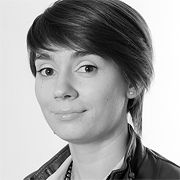 As Head of Russia, CIS and Baltic states broadcast for RT, Xenia is working on the launch of new broadcast projects and is in charge of several departments responsible for content production, promotion and distribution, cross-media platforms, as well as launching and managing several news websites for RT.

Previously Xenia was in charge of media projects at RT and was responsible for distribution of Spanish language RT in Latin America as well as news content distribution for media professionals via online video portal Freevideo.RT.com. She reports directly to the Editor-in-Chief and leads a team of 130 professional editors, technical staff and managers.  RT is a group of 24/7 news channels broadcasting in English, Arabic and Spanish to global audience. RT has studios based in Moscow and Washington DC and bureaus in London, Paris, New York and Berlin. It is the most-viewed news channel on YouTube with over 700,000 million views and is available to more than 400 million viewers around the world.

Xenia has worked her way up through several departments at RT, starting out as a producer on the international desk, then becoming an executive producer, and she now leads a team of 130 people in her current role as Director of Russia, CIS and Baltic states broadcast. Her work has taken her to several international hotspots and she has interviewed leaders, like former US Secretary of State Condoleezza Rice and European Commission President Jose Manuel Borroso.