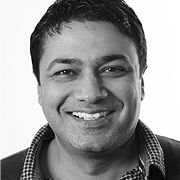 In his last job, Vin was the Creative Director of an international agency called Palmer Hargreaves with automotive bias and offices in Germany and Russia. There, he managed a fully integrated team comprising: copywriters, art directors, designers and developers. Most notable achievement recently was how he helped the agency (which hadn't been known for its creative product) get 12 nominations and convert 7 of those into gongs at the National Fresh Awards in 2013. Throughout his career, his work has featured in numerous award shows including D&AD, One Show and New York Festival. He has also been on the jury of Creative Circle London, and is a guest lecturer at BIAD (Birmingham Institute of Art and Design).

Vin decided to come to the Berlin School of Creative Leadership because he wants his career to take a new turn. After making the transition from Creative to Creative Director, he now truly wants to be a Creative Leader. "I believe that creative leaders are best-placed to help create and inspire other creative leaders. This is a very important time in my career and I'm hoping the course opens my mind to some new approaches in leadership, innovation, people management... etc. And opens some new doors for me at the same time."

Before PH, Vin was Group Head at McCann Erickson, and creative lead on several brands including Harley-Davidson (US and Europe). There, he was responsible for creating one of the most awarded campaigns of 2011: 'hand-picked by the establishment' for Harley-Davidson. Prior to that, he worked in the London (and European) offices of Bates. Vin received his Bachelor of Science in Statistics at St. Xavier's College and his Masters in Advertising & Communications at NMIMS in Mumbai. He has also worked at agencies in India (JWT, DDB and Ogilvy) before winning a D&AD prize and moving to London.