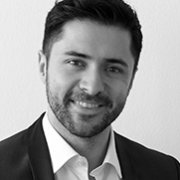 Thiago has more than 10 years of experience in the area of film production, and has worked on commercials, documentaries, music videos, video art, and short films as well as political campaigns. He has directed more than 200 films and worked with advertising agencies such as Heads, JWT and Master. In 2006, he won the “Professional of the Year” Award with the commercial “Pool” (JWT).

Thiago graduated from the Vancouver Film School with a Diploma in Film Production and went on to complete a Filmmaking Program at the New York Film Academy in Oxford. He also studied History of Photography, Italian Cinema, Early Renaissance and Modern Art at the Studio Art Center International in Florence, as well as Business Administration at the Positivo University in Brazil.

Thiago believes that without team motivation one can never have a great movie and he hopes the EMBA would help him become a better creative leader. “In the last ten years of my professional life I have had a number of challenges related to leadership. Experience showed me the importance of knowing how to lead a team towards a common goal. A director works with 30 to 50 people in the making of a film. It’s his job to keep this team together, tireless and focused on the same goal. This is not an easy task but it’s a task I want to accomplish better and better.”