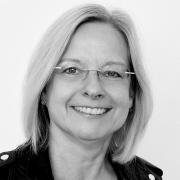 Susann is CEO at the Berlin School of Creative Leadership Foundation. She is also working as business and executive coach.

In December 2020 after nine years, Susann Schronen stepped back as CEO of the Berlin School operating units. Her remarkable trajectory in this position enabled the school to cement its unique place at the forefront of executive education in the creative industries and beyond.

Susann’s career experience in the creative industry stems from a range of management positions within the agency, client, and institutional side. With this, she brings a valuable combination of high-level strategic thinking, operational leadership, and essential process management to business development and educational tasks and to her practice as executive coach.

Susann's professional career began as a Marketing Assistant in the chemical industry. She then switched to the agency side, working as an Account Executive for Grey and Ogilvy One for five years. After being recruited for a challenging position on the client side, she led the in-house agency of the number one German department store chain, where she later managed two big mergers and became marketing director of a fashion retail company within the same group. During her 8 years in retail, she significantly influenced the strategic development of corporate brands and the departments she had to lead.

Moving to Berlin in 2001, Susann became Managing Director of the Art Directors Club, and ran the not-for-profit-organization for 10 years. In her position, she focused on building a new structure and developing new business, and was crucial to the founding and development of the Berlin School. Here, she has been playing an active role as Managing Director since August 2011, before becoming CEO in 2017. After stepping back from her operational duties at the Berlin School in December 2020 she continues serving as CEO of the Foundation and is focusing on her activities as executive coach.

Susann graduated from the University of Düsseldorf after studying French and Spanish Literature and Linguistics, as well as Educational Science. She is a certified Business Coach from Berkeley Executive Coaching Institute, at Berkeley University of California and from artop - Affiliate Institute at Humboldt University, Berlin.