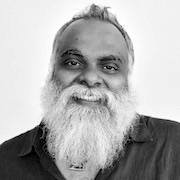 Born in India in 1973, Suresh graduated from the prestigious National Institute of Design, Ahmedabad, specializing in communication design in 1997. He led teams for over two decades that have created animation films in 2D, 3D and pioneered Clay/Stop motion in advertising films in India, at a time when animation was relatively a new medium in the country as compared to the west. With his firm belief in the design process for communication solutions, Suresh has been instrumental in creating animated ad films by going beyond the traditional techniques and storytelling conventions that were popular then in India. His path breaking exploration of new visual styles to tell things differently yet effectively is perhaps the reason for an audience and a whole new industry that heralds an exciting phase of Indian animation.