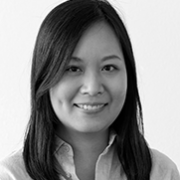 A Creative Director at GREYnJ UNITED, Jesse began her advertising career as a Copywriter at DDB and was later a creative at JWT, Leo Burnett, Grey and Young & Rubicam, before rejoining DDB in 2013. She has worked with clients such as Rolex, Nikon, HSBC, McDonald’s, Virgin Atlantic, Philips and the Hong Kong Tourism Board, among others.

In her job as Creative Director at DDB, Jesse explored and nurtured new creative and business opportunities with both existing and new clients. “Amidst the busy schedules, impossible deadlines and never-ending challenges, I am constantly reminded of my passion for the work. In between self-development and nurturing young talents, I never stop exploring new creative territories. I was excited to see where the EMBA program would take me and I hope to be able to share this invaluable experience with others in the future.”

A Canadian national, Jesse studied Philosophy at York University in Toronto before becoming a Copywriter at DDB.

In 2010, her short film “Goodnight” was among the official selection at the Tokyo Short Shorts Festival, and in 2011 she took part in the “Royal Play” art exhibition. Along with her current work in advertising, she is a freelance lyricist and a member of the Composers and Authors Society of Hong Kong.