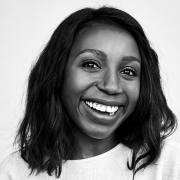 Selae Thobakgale is a Strategy Director and Consultant at The Odd Number and Founder of Africanvass, a social creative agency based in Johannesburg, South Africa. Africanvass’ core belief is in the power of creativity in coming up with solutions that can add real value in making the world a better place.

Selae has been in the advertising industry for ten years. She has worked with some of the biggest brands and creative agencies on the continent, including TBWA\ Africa and GTB. Prior to advertising, Selae’s career started at the age of seven as a television presenter. Having garnered national appeal and respect through her on screen work, Selae chose to use her profile as a platform to add value. Through her career of now 23 years, Selae has established an influential network. She has realised that collectively, there is power to bring about social change. Selae believes in the potential of Africa and its people and has created Africanvass as more than just a venture, but as a calling and platform for every individual that wants to play their part.

She holds a BA in Brand Management and Communications from Vega School Of Advertising and BA in Media and Sociology from Wits University.

Selae describes herself as a “creative mind with a heart for change” and hopes that the Executive MBA in Creative Leadership will allow her to tap into global thinking and grow her vision.