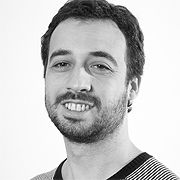 Rodrigo is COO at Gonfam Participações, a holding company focused on private equity investment in sectors related to the creative economy and social impact.

For nine years, Rodrigo was CEO at Lua Propaganda, an agency with more than fifty employees and ranked among the 50 biggest agencies in Brazil. While running Lua Propaganda, he brought new businesses and won two Lions in Cannes, as well as awards from ADC and others.

Though he had already achieved success in his agency, Gonzalez came to the Berlin School of Creative Leadership to gain hard business skills that he needed to continue to grow his company soundly and strategically. “I’d been doing that by heart, and somehow it had been working. But, I really think that exchanging ideas and learning the best practices from some really great minds, people that are making the future, helped me on the task of leading an independent agency to the top of the industry.”

Starting out as a copywriter, Rodrigo Gonzalez has worked in several facets of the advertising industry. He received his undergraduate degree in Social Communications in Brazil and took classes at the School of Visual Arts in New York and the New York University.