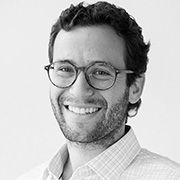 Roberto is an entrepreneur that has been working in the communications field for over 10 years. He founded 3yz, a digital agency that was later sold to WPP, where he continued to act as a CEO afterwards.

For his work, he was elected ‘Communications Businessman of the Year’ in 2016 by the Riograndense Advertising Association and was also on Forbes Brasil’s ‘Under 30’ list in 2017. In 2018, after working as an Executive Director at Ogilvy Brazil, he decided to pursue his new professional project: BPool, a b2b platform of creative products.

Roberto is also a Board Member of Maromar Investimentos and part of the Marketing Committee of Stone Pagamentos. Always on the lookout for technology-related innovations, he has attended programs at Singularity University and Hyper Island.