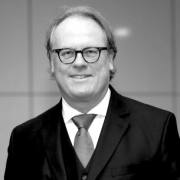 Board of Directors
Berlin School of Creative Leadership Foundation
About

Prof. Dr. Gerhard Blechinger is an Art Historian, Philosopher, Rector of the Salzburg University of Applied Sciences and Academic Director of futur.io Institute Hamburg, and sits on the Board of Directors at the Berlin School.

From 2011 to 2015 Gerhard Blechinger was Dean of the MultiMediaArt Faculty at the University of Applied Sciences in Salzburg. In 2010 he co-founded the Berlin-based company, Experimental Game, and is now working on founding a new university of applied sciences dedicated to sustainability and innovation, also in Berlin. From 2007 to 2010 he was head of the Institute of Design and Technology at the Zurich University of the Arts 2007-2010 and before, between 2000 and 2007, Vice-Rector for Research and Development at the University of Design and Art. Gerhard established first Post-Graduate Masters Programs in Switzerland, including the Masters in Mobile Application Design, amongst others. In 2005, he founded the TRACE research group which works in the field of neurophysiology and aesthetics. He is also the editor of numerous TRACE books. From 1998 to 2000, he was Vice-Director of the Mediamuseum and Director of the Medialab at the Center for Art and Mediatechnology in Karlsruhe. Gerhard finished his Doctorate in 1996 with a thesis on the political implications of Jacques Derrida deconstructive philosophy.