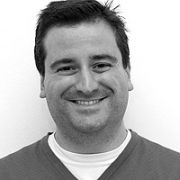 Mauricio Garnier is a Managing Partner at Garnier BBDO, a Costa Rican Advertising Agency, founded by Alberto H. Garnier in 1921, and part of the BBDO Worldwide Network since 1985.

Mauricio Garnier was born in San José, Costa Rica. In his 20 years of professional experience, he has worked on a huge range of different categories: from beer to milk, from pizza to chocolates, from computers to cars.

He has been with Garnier BBDO since 1990. As Chief Creative Officer, he has led the agency to win Gold, Silver and Bronze awards at all local and regional awards, as well as awards such as the New York Festivals.

During his time at the Berlin School, Mauricio did a joint degree in Business Administration at Steinbeis University. He is now focused on working on the future of Garnier BBDO, and developing the ideas, visions and concepts, which he was exposed to at the Berlin School.