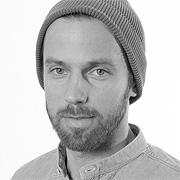 Martin is Co-Founder and Director of Product at AND CO from Fiverr.

He was a Creative Director at Jung von Matt/Alster, where he worked on digital and integrated campaigns for national and international clients, such as Mercedes-Benz, NBC Universal, sixt, Bild, Sparkasse, evian and Konzerthaus Dortmund. He participated on the 2012 New York Festivals Grand Jury and was part of The One Show Interactive panel, awarding the most creative and innovative interactive communications at the 16th Annual One Show Interactive Awards. Martin has received several awards including a Cannes Grand Prix, Eurobest, Clio, London International Awards, New York Festivals, ADC NY, Europe and Germany, AME, Euro Effie and the One Show Interactive.

He studied Media Information Science in Hamburg and Multimedia Design in Cape Town, before he was recruited to Jung von Matt to help build their digital department in 2005. He worked as a Screendesigner, Art Director and Creative Director for the agency.

Martin took the opportunity to exchange ideas with other leaders at the Berlin School of Creative Leadership: “After being in the same place for such a long time, I was looking forward to learn, discuss and get inspired from other industries.”