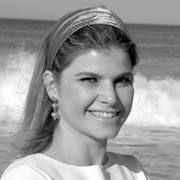 Manoela Amaro is Founder and CEO of Blanc Fashion, a global export platform bringing Brazilian fashion to the rest of the world.

Manoela founded Blanc Fashion in 2014 from her adopted home in London. Blanc’s mission is to put Brazilian Fashion on the global map using technology to establish and strengthen connections between local designers and international retailers. Blanc also supports collaboration amongst Brazilian designers to forge a more competitive industry in terms of pricing, quality, and commercial infrastructure.

Manoela’s career began in advertising, working for Brazilian agencies such as Markup Incentive Marketing and Salles BBDO. She later joined the in-house ranks at TAM Airlines, steadily progressing to CMO, where she would remain until 2012. Under her leadership, TAM became a pioneer in in-flight entertainment, both in production and acquisition of content as well as in the purchase of technology systems. Since 2009, TAM has been one of the first airlines to offer a full on-board communication services.