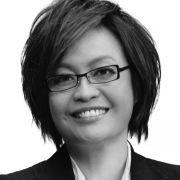 Kitty Lun is Head of Creative Shop for Facebook Greater China. Before that, she was Chairman and CEO of Lowe Worldwide China, based in Shanghai.