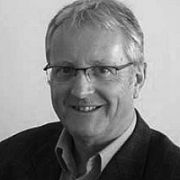 John is Head of Programme and Secretary to the Advisory Board of the Entertainment Master Class.

In his early career John was a teacher, a writer, a designer of educational resources for the UK’s major publishing houses, a TV rights owner, the producer of a BBC 2 educational TV programme and a restaurateur.

For the past 14 years John has established a broad base of experience in the international television business. John’s experience encompasses all the key areas of the entertainment format business from creation, production, distribution to training and education.

The creating of the hit game show format In The Dark originally propelled John into entertainment television and the format business. The format was launched in 1996 on ITV with John as executive producer and has since aired with major broadcasters in 35 territories across the world to date. From 1996 until 2001 John travelled the world learning about the format business by producing his format in the studios of the world’s major broadcasters from Japan, Europe to the USA and Latin America. Since 2001 John has successfully co created other In the Dark formats for a range of audiences, notably a highly successful Saturday morning series for children. John still produces the format(s) for broadcasters in many territories.

In the past John has worked closely with FRAPA (the Format and Protection Association) and has written a brief history of the formats business for the FRAPA/Screen Digest report on the Global Trade in TV Formats as well as making contributions to many of the major publications concerning formats and the formats business that have been published during the last ten years.

John has been a member of the world’s major TV festival jury panels that have included those at the Rose d’Or Festival (Switzerland), the I Emmys (New York) and the Format Awards Jury (Monte Carlo). For 10 years John was Director of Creative and Business Development for Distraction Formats (London. Montreal. Los Angeles). John is currently President of the International Advisory Board of the Rose d’Or Festival in Switzerland, Head of Programme for the Entertainment Master Class in Germany, the ‘godfather’ on the MBA programme at the Berlin School of Creative Leadership and sits on the boards of Fundamental Entertainment TV and Screen East (UK).

John also speaks at seminars and conferences around the world, is an honorary member of the British Society of Comedy Writers, and is a member of BAFTA (British Academy of Film and Television Arts).

It was at the Rose d’Or Festival in 2000 that John launched the concept of the paper format, a product that is now traded worldwide. The creation and development of paper formats is now an area of business where John assists creators and producers to capitalise on the commercial value of their conceptual material.