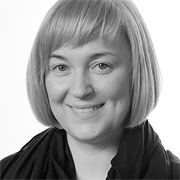 As SVP of Viacom International Media Networks, Izabella launched an HD channel for MTV Networks international. The channel is currently distributed in over 30 countries worldwide. She also launched the Nickelodeon HD channel for Russia and Poland, was responsible for leading MTV’s international efforts in developing 3D projects, and has increased profitability of her regional unit tenfold. Under her leadership, the Polish media industry recognized Viacom International Media Networks Poland with many awards as by assigning them a status of experts in the field of successful execution of the global television trends in the local markets.

Izabella came to the Berlin School of Creative Leadership to build a strategy for television of the future and how to balance the elements of business with creativity. “Transformation has brought a lot of challenges to the industry and how we handle them will decide the future of the business. I would like to focus on some of these challenges while a the Berlin School of Creative Leadership.”

Izabella has 16 years of experience in the television industry, working with Viacom and MTV throughout most of her career in the roles of spokesperson, general manager, marketing, vice-president, and now senior vice-president. She was named one of the 50 most influential women in Poland by “Home & Market” magazine and was a finalist for the Businesswoman of the Year by BRE Bank and Radio PIN. She was also the winner of the “Keep Walking” award by Newsweekreaders and is a member of the Emmy Awards Academy.