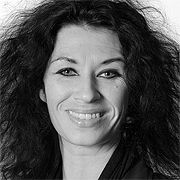 Ilka is the first recipient of the Worldwide Partners, Inc. scholarship for the Berlin School of Creative Leadership EMBA Program.

Ilka is a creative leader who combines a creative heart for unique ideas and execution with global strategies in passion and perfection for big brands.   After her studies in Graphic Design in Munich 1993, Ilka worked as a creative allrounder for small creative agencies like Wüschner Rohwer Albrecht as well as for big international networks like TBWA for many years. She has been in charge as Chief Creative Officer of Wächter & Wächter Worldwide Partners for more than 7 years, after being many years Creative Director at SERVICEPLAN.

She graduated in 2016 with an Executive MBA degree in Creative Leadership (Berlin School of Creative Leadership, Steinbeis University), as well as having received the Michael Conrad Outstanding Thesis Award 2016. She is on the graduation juryboard of the design academy U5 in Munich, was graduates supervisor for the University of Rosenheim and the first recipient of the Worldwide Partners, Inc. scholarship for the Berlin School of Creative Leadership EMBA program as well as jury board member of different international award shows. Ilka has won numerous awards and has been a finalist for her work at several industry shows including: Art Director’s Club, BoB, Cannes, Clio, DDC, Effie, Epica, Eurobest, GWA Profi Award, New York Festivals, One Show, Ramses and among several others.

Some of her clients, past and present, include: Apple, BMW, Dannemann, Disney, IVECO Magirus, KIKKOMAN, the City of Munich, LEGO, STABILO, Siemens, Telefonica, O2, Saudia Arabian Airline, Rothmans, as well as numerous others.

At present she is founding noA** - the emotional creagency, as well as offering a Toolkit Training for Creative Leaders how to avoid toxic culture. She is currently working on her first book “BUTTERFLIES OF HELL” - The story about increase of power versus decrease of empathy - especially among “MAD MEN” ( & “MAD WOMEN).