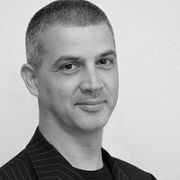 Gideon is the Founder and Chief Creative Officer of “NO, NO, NO, NO, NO, YES”, a creative boutique in New York. He was formerly Chief Creative Officer & Joint Managing Partner of Shalmor Avnon Amichay / Y&R, Israel (1994-2011), where he led the agency to become a market leader in creativity and innovation (7 times Agency of the year), and one of the 3 biggest agencies in the country. In 2011, Shalmor Avnon Amichay was sold to WPP's Y&R network.

Gideon’s achievements include international awards, such as 19 Lions at Cannes festival (2008-2012); 2nd Media Agency of the Year, Cannes Lions 2009 and 2nd PR Agency of the Year, Cannes Lions 2011. He served as the President of the Direct Jury at the 2012 Cannes Lions. Other awards include: 9 Clio awards for Innovation and Content & Contact; the United Nations Special Award (UN); the London International Awards Grand LIA; the New York Festival Grand Prix and many more.

Gideon received a BA (Honors) in Graphic Design and Visual Communication from the Bezalel Academy of Art and Design in 1990.