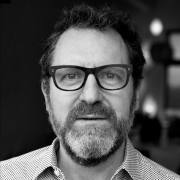 Federico Gaggio is a widely awarded creative leader with a strong track record of building global media brands. He set up his own consultancy company called Do&Co back in 2015 where he works collaboratively with clients and partners to develop their visions and strategies all the while nurturing a culture that enables them to grow their audience, brand equity and revenue.

Prior to founding Do&Co, Federico worked as VP Brands and ECD for almost a decade at Discovery Inc. in Europe where he worked with clients such as BBC, SKY, Eurosport, Discovery, the streaming film service MUBI, as well as fostering the strategic partnership with lead design agency PENTAGRAM.

All in all, Federico has worked for over 20 years in creative agencies – two of which he founded in Paris and London – and media organizations in graphic design, film-making, creative direction, strategy and leadership roles. In his extensive creative career, he has been awarded numerous industry recognitions, including Cannes Lions, D&AD, Broadcast Awards as well as Promax/BDA awards. In 2016, he was named one of the top 50 Creative Leaders in the UK by Creative Review.

He studied Philosophy at the State University of Milan, participated in our 2017 Cannes Creative Leaders Programme and is a proud alumnus of our Executive MBA in Creative Leadership after defending his thesis Decoding Brand Narratives in Media in March of 2020.