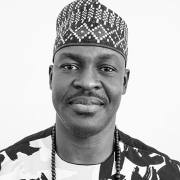 Prior to joining Viacom, Bada was Creative Director of Globacom at SO&U, where his legacy was to transform the advertising portfolio of a telecommunication brand struggling for identity, resonance of message and relevance. Within two years, it would become one of the fastest growing data networks in Nigeria by shaping positive perception for the brand and winning multiple awards along the way. Previous to this, Bada’s media career included roles as a Presenter, Producer, Copywriter, and Creative Director for several media and broadcasting organisations across Nigeria.

Bada’s work has afforded him several industry awards including being selected as one of the ten most powerful people under 40 in the media in Nigeria by ynaija, Nigeria's most popular youth news platform.

A passionate musician, producer and vocalist, Bada describes himself as a ‘music junkie’.

Bada hopes that his Berlin School journey will help him to step up his game especially as he leads “in an industry that's grappling with the harsh realities brought about by the explosive growth and aggressive penetration of mobile and digital media.”