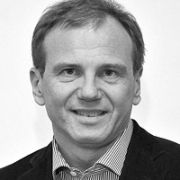 Wolf was named Austria's most popular television anchor in 2006, 2007 and 2012, Journalist of the Year in 2004, and Onliner of the Year in 2012 (for combining his TV work with social media). He began his career at ORF as Foreign Affairs Correspondent and went on to become U.S. Correspondent for TV and radio in the ORF Washington Bureau. Wolf has earned a master’s degree and a doctorate in political science and lectures at various universities