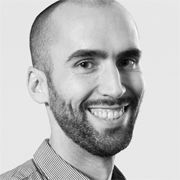 As Partner and Strategic Planner for Activeark Ltd., André manages a team of eight creative professionals. Activeark is the second largest digital design company in Finland and has offices in Helsinki, London and Mumbai. Founded in 2003, Activeark is a growing agency with 80 employees. In 2010, it was ranked the most respected digital agency in Finland by M&M Magazine. In 2011, it won five major web awards including the International Web Award and two Grand One awards.

Before starting with Activeark in 2007, André worked as a sales manager for two years with GeB Products Ltd. He studied Marketing and Economics at Hanken School of Economics in Finland. Since working with the digital design agency, he has won the Vuoden Huiput, Silver award in April 2011 and the Best integrated Media Campaign in Finland 2010 with the Otto Drinkero launch campaign for Hartwall Oy (part of Heineken group).

André is part of the Berlin School of Creative Leadership to expand his strategic thinking and leadership skills. “The learning by doing has brought me to the point where I'm now, but in order to go further I feel that I need a different kind of learning. I want to find completely new ways to think, act and interact in my professional life.”