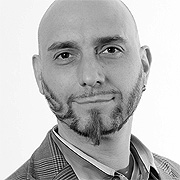 Aleksej’s company, Circus of Now Productions, is a show production visionary think-tank, helping clients in the cinematic, music, and advertising industries conceptualize and stage productions, exhibitions, and various events. Aleksej’s main role consists of Conception, art direction and realisation – from the idea via the technological experiment to on site-operating, especially visual media and stage design. He leads creative groups of up to 50 people – conceptualising and implementing hundreds of complex projects in collaboration with agencies and direct customers, authorities and institutions. He has worked with major corporations, international festivals, global NGO’s and won dozens of awards, including 2 silver medals the New York Festivals, 2 Globe Gold awards at the World Media Festival.

With more than 15 years in the event planning and design industry, Aleksej has worked on major productions with multi-million euro budgets around the world. One of his recent projects was stage design and media production for the highly successful YMA show at Friedrichstadtpalast in Berlin, with a budget of more than 8 million euro. He has also worked on projects with dozens of major global companies. Aleksej received his Bachelors in Pyschology, Philosophy, and Politics at Freie Universität Berlin.

Aleksej comes to the Berlin School to develop business skills that will allow him to work within any corporation and business as he further develops his company. “My career has been marked by strong achievements and notable successes, but these partly reflect serendipity, which does not provide a systematic basis for a sustainable career in the creative industries. Therefore, I have to acquire stable knowledge structures through a recognized formal qualification like the EMBA in Creative Leadership, and in the future not rely only on experience-based principles of decision-making.”