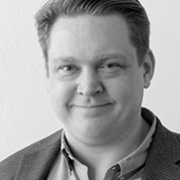 Agnar co-founded Jónsson & Le'macks in 2003 and since then the company has grown to be one of the leading advertising agencies in Iceland, working with clients such as Audi, Skoda, Carlsberg, MasterCard, Nike and several local brands.

He started out in the advertising industry as a Graphic Designer at Gott Folk McCann-Erickson before branching off into music and co-founding a techno night club and later becoming Director of Communications at the Iceland Airwaves Music Festival, before co-founding J&L in 2003. In 2012, the company participated in the creation of the mobile game developer Plain Vanilla. Two years later, J&L created a Venture fund with other investors, contributing both capital investments and product and marketing development expertise.

Agnar hopes the Berlin School will equip him with the right tools to get through the digital age. “Most of what I have learned about leadership and management is through the trials and errors of running a company. But I believe that what develops you the most as a leader are the difficult times. Right now all communications agencies are going through an identity crisis and trying to figure out what they are going to be in the new world.”

After graduating from the Commercial College of Iceland, Agnar studied Business Administration at the Reykjavik University and completed various short courses in Communication, Branding and Marketing.