The Whiplash Effect: Rethinking the Lessons of Musical Leadership 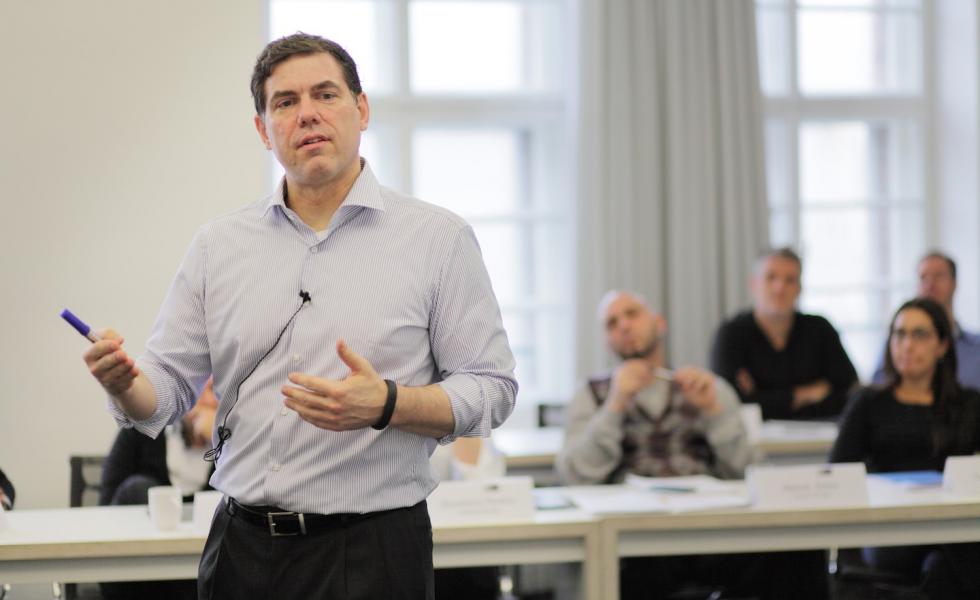 For many years, the conductor leading an orchestra has provided a useful metaphor for thinking about how to lead diverse talents gathered around a shared purpose. The metaphor assumes multiple forms, of course, from the commanding George Solti to the inspiring Gustavo Dudamel. A favorite TEDTalk, by Italy Talgam, captures the power and complexity of the orchestra leader’s role by exploring the styles of six different conductors.

Since at least the mid-1990s, another musical metaphor has held increasing sway in discussions of contemporary leadership that aims to foster innovation and creative collaboration: the leader of a small jazz ensemble. This figure commonly facilitates soloing and supporting, encourages experimentation and accepts the resulting mistakes, and ultimately balances the structure of the group and the talents of individual members. Among the most familiar examples is Miles Davis during the recording of Kind of Blue, the towering 1959 modal jazz album that broke new ground by improvising on scales in an era when chord progressions, and the Bebop music they characterized, were the norm. Davis and the Kind of Blue sessions have come to epitomize a form of leadership associated more generally with jazz: open, adaptive, and enabling of innovation.

Various management thinkers have explored the tools and techniques of leadership and collaboration employed in this style of jazz. Arguably the greatest single volume ever written on the leadership of business creativity, John Kao’s essential and pioneering Jamming, takes its title from and consistently returns to the musical form in discussing how to inspire and guide innovative thinking and performance. Similarly, one of Andy Boynton and Bill Fischer’s ‘virtuoso teams,’ which transform many high-level talents into extraordinary group performance, is Davis’s Kind of Blue sextet that included John Coltrane, Cannonball Adderly, and Bill Evans. More recently, in Yes to the Mess, Frank J. Barrett persuasively details how the musical lessons of unlearning, ‘provocative competence,’ and ‘strategic improvisation’ from jazz can serve as bases for leadership success.

Without question, Davis and the open and adaptive leadership he practiced (at least in the late 1950s) provide a useful counterpoint to the apparently more rigid and controlling behaviors of orchestra conductors. Yet just as those conductors can be seen to lead successfully in different ways, so jazz offers other approaches to leadership besides those evident in the melodic improvisations of the small ensemble. The jazz orchestra, to take but one example, offers a potentially distinct form and metaphor of musical leadership.

Damien Chazelle’s Academy Award-nominated film, Whiplash, dramatizes just such a vision of leadership of a jazz orchestra seemingly distant from Davis’s vaunted small-group improvisations. The film tells the story of a young drummer, Andrew Nieman (Miles Teller), enrolled in an elite New York music school and pursuing his dream of becoming a great musician. In the process, he encounters Terrence Fletcher, an imperious faculty member who conducts the school’s top competitive jazz orchestra and selects Nieman to vie for a seat. The plot follows the pair’s interactions, which are at turns emotionally uplifting, psychologically intense, and, in actor J.K. Simmons’s superb portrayal of Fletcher, simply terrifying.

Set in a school and inhabited by young aspiring musicians, Whiplash often speaks explicitly to fundamental questions of creative development and performance. What kind of training or learning, if any, produces or nurtures artistry? How do individual passions and talents survive, much less thrive, amidst real-world pressures of competition and performance? Which type of leader best enables individual growth and creative collaboration? Citing a traumatic incident he claims led to the transformation of Charlie Parker into the musical genius, ‘Bird,’ Fletcher rationalizes his own unforgiving and even cruel behavior as being necessary for the maturation and creative breakthroughs of the students.

A crucial aspect of the film’s attention to creative development and expression is its emphasis on practice and preparation. Through these scenes, viewers witness the grueling learning process preceding the performances that are often the singular focus of thinkers searching jazz for models and metaphors of leadership and innovate interactions. Such preparation is ordinarily neglected in shorthand versions celebrating the potential for more effective and imaginative teamwork in the improvisations of jazz performance. Likewise, the rehearsals reveal the more consistent ‘everyday’ leadership of musicians off-stage that shapes what occurs in eventual public showcases of creative collaboration.

Offering another explanation for his approach to leadership, Fletcher draws a sharp contrast: conducting can be an empty act of ‘waving arms’ or a commitment to ‘pushing people beyond what’s expected of them.’ His unmistakable commitment to the latter is exhibited throughout the film. Yet what’s also revealed in Whiplash is that the ways he pushes people, particularly Nieman, while always intense, vary. Fletcher’s situational sensitivity and awareness may be seen largely to engender escalating forms of manipulation but it also speaks to a leaderly flexibility deployed in pursuing a given purpose over time.

Nieman, meanwhile, pursues his dream of musical success with single-minded if naïve abandon. As a long-time educator of creative thinkers and doers, I recognize both the character’s passion and drive and his difficulty reconciling his own deeply-held aspirations with external demands and expectations. The film overall can be seen, in fact, as his journey from determined individual talent to more purposeful collaborator.

The climactic sequence of Whiplash features a masterly conflict between the two characters. While drawing together various other plot points, the closing performance is most powerfully a contest of musical leadership. That contest does not play out according to any simple metaphor of musical performance or leadership but as a result of Nieman’s and Fletcher’s respective personalities responding to each other and the situation they have together constructed. In other words, despite having started the sequence with their own particular (and quite divergent) intentions, the pair end up working through a fierce confrontation with each other, which includes a ferocious solo by Nieman, before finally, genuinely collaborating.

Like all management metaphors and models, those rooted in musical interaction and performance should be means to better understanding, analysis and action rather than ends in themselves to be pursued and replicated. Watching the final sequence of Whiplash called to my mind the insightful suggestion by Herminia Ibarra to embrace a ‘command and collaborate’ approach to leadership. While not fitting every personality or situation, that kind of hybrid formulation reflects the sensitivity, awareness, and adaptability that leaders of teams and organizations can benefit from actively exercising. It also demonstrates how thinking more deeply about the many forms of collaboration practiced in music can help leaders and followers alike to make better sense of their own actions and to work together more productively and creatively.