The Rise of Rituals in the Realm of Creative Business 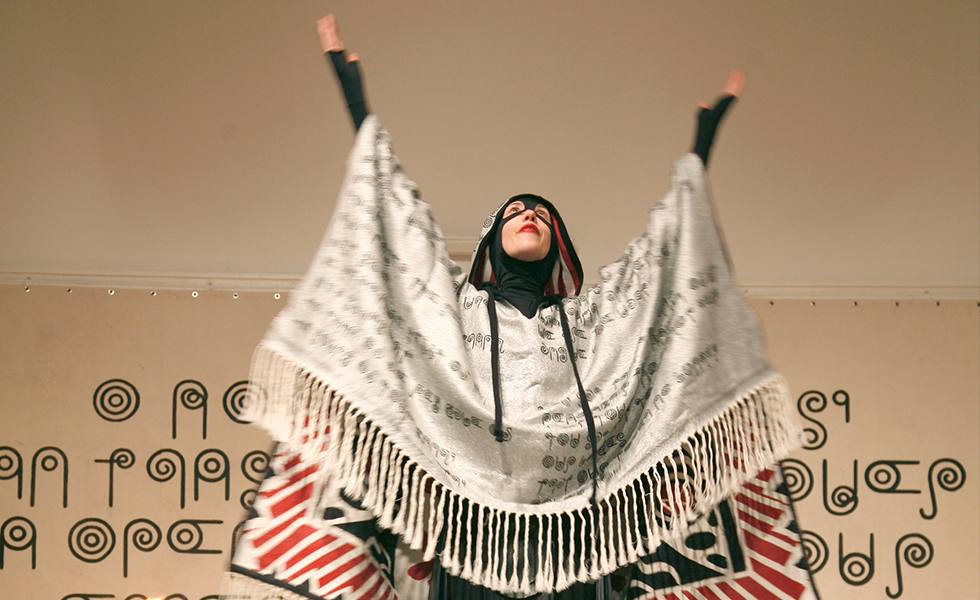 Practiced by people since time immemorial, rituals are finding fresh resonance in both corporate and creative contexts.

“Rituals” is a decidedly woo-woo word. If it doesn’t make you think of the shop selling bath potions and massage oils, most likely images of candles and incense smoke come to mind. So it may be surprising to hear that rituals are becoming increasingly established in the business world, thanks to the range of benefits they have been shown to offer – on both an individual and collective level.

Mike Norton and Francesca Gino, behavioral scientists and professors at Harvard Business School, may have been responsible for triggering the buzz with their range of studies over the past decade into the effects of practicing rituals. Through these, Norton and Gino have demonstrated that, “rituals in the face of loss can help us feel less grief, rituals with families can make us feel closer, and rituals with our partners can reinforce our commitment to each other.”1 In different studies, the Harvard researchers and a team at Carlson School of Management also discovered that rituals increase people’s perception of value. At Harvard, the “ritual” consisted of breaking and unwrapping a chocolate bar following a specific set of steps defined by the scientists. Participants reported finding, “the chocolate more flavorful and enjoying it more. They also took more time to savor it and were willing to pay nearly twice as much for more of it.” An article in the Harvard Business Review concludes, “if employees perform rituals as part of their jobs, they are likely to find their jobs more rewarding.”2

There’s a further dimension to rituals that may be of particular interest to those leading creative teams: cognitive neuroscience has found evidence of a positive correlation between rituals and creativity: “ritual promotes thought suppression – tuning out the inner critic, dampening brain chatter, centering and focusing the mind and decreasing anxiety before executing complex tasks”3 while also “mitigating the negative experience of personal failure”4.

To fully understand how rituals might be integrated into creative and innovation-focused business contexts, however, we first need to understand what they are all about.

According to Design for the Human Soul5, a publication released by the Sacred Design Lab, a Brooklyn-based “soul-centered” research and development lab, rituals require “intention”, “attention” and “repetition”. In this way, they distinguish themselves from routine activities – which are solely about repetition. Routines and rituals also have very different psychological effects: “The structure of routine comforts us [while] the specialness of ritual vitalizes us.”6

In studying the history and uses of ritual from ancient history down to the present day, across a range of cultures, the Sacred Design Lab theorizes that rituals serve to fulfill three fundamental experiences all humans yearn for – “belonging”, “becoming” and the “beyond”.

We probably all remember times in our lives when we’ve strived for “belonging”: the first day in a new office or classroom; as children, asking to have the fad item the other kids had. Many offices already have rituals that address people’s need for belonging: onboarding activities, birthday celebrations, team lunches. In part two of this article, we will look more closely at these classic corporate rituals to see if they are appropriate to creative businesses, or can and should be adapted – for now, let us simply acknowledge their tried-and-tested role in building a sense of connection and community.

“Becoming,” as defined by the Lab, means: “growing into the people we are called to be”. This definition suggests that we all hear the beat of a different drum inside ourselves and that rituals are key to both tuning into these rhythms – identifying our unique gifts and sense of purpose – and putting our music out into the world and hearing it reverberate back at us. Again, there are already some rituals in place in the corporate landscape that work to this end: feedback and coaching programs, knowledge-sharing sessions and established celebrations of achievement such as doing a victory dance to a team song or going for a meal. As long as these are done with the aforementioned “intention”, “attention” and “repetition”, they serve to deepen participants’ feeling of achievement and being valued within the collective. These kinds of rituals – and the scope for enhancing them in creative business contexts – will be examined more closely in part two as well.

When we talk about the last type of experiences fulfilled by rituals – experiences of the “beyond” – an itchy discomfort may go through business leaders, even those working in the creative realm: where exactly does spiritual woo-woo meet the supposedly secular workplace? According to the Lab, such experiences are about “experiencing ourselves as part of something more”. Thus, accomplishing this via rituals doesn’t have to be as ‘out there’ as you might imagine. According to the book “Rituals for Work” by Kursat Ozenc and Margaret Hagan of Stanford’s Ritual Design Lab, two principles of rituals are that they: “have a magical ‘je ne sais quoi’ factor” and “carry symbolic value that gives a sense of purpose” and is “beyond the practical” 7. While many of the examples that Ozenc and Hagan provide in their book fall under the “becoming” and “belonging” umbrellas, many include none-too-practical, je-ne-sais-quoi ingredients that simultaneously tilt them into the realm of the “beyond”. For example, the Pinning Ceremony is a sort of graduation rite for participants of the Design Lab. Students are invited to form a circle, and one by one they are presented with a red velvet box containing five lapel pins of different symbols, none of which has a designated meaning. The students each select a pin and explain the meaning the symbol has for them. When this process is complete, students team up in pairs and take turns pinning their new pins on each other while the teachers read out a scripted announcement of the course completion.

Why would a simple pin shaped as an ambiguous symbol in a red velvet box hold any significance for graduates of a high-level academic program, you might well ask. Nonetheless, for most of us, it is easy to think of examples in our own lives where mundane objects have acquired a power larger than themselves due to a subjective association. In this case, it may not be the pin at all that stays in people’s minds, but the remembrance of a unique activity, engaged in with others, that marked a moment in their lives and united them to a larger concept and movement. Ozenc and Hagan also recommend creation of team “touchstones” in their book, such as the “Play Like a Champion” sign used by the University of Notre Dame’s football team, explaining that “it is all about the placebo effect, of giving people a sense of control, combined with a hint of magic.”8

For skeptics out there, it’s worth pointing out that some highly successful athletes and performers are among the most enthusiastic embracers of “beyond” rituals. From Raphael Nadal’s careful placement of his drinking bottles by his bench to Keith Richards’ tradition of breaking the crust of a shepherd’s pie before going onstage. While these may appear more mundane than expansive, as Nadal explains, his ritual is, “a way of placing myself in a game, ordering my surroundings to match the order I seek in my head.”9  And though we don’t know the nature of Keith’s association with shepherd’s pie, given the context, we can safely assume this is not a ritual about belonging or becoming.

Something else these examples of “beyond” rituals show us, is that rituals don’t necessarily have to make sense or be appealing to outside observers. What’s important is that they resonate deeply with the participants – whether individuals or groups. Here at the Berlin School, we have one unique ritual that has been around since the first graduating class: the signing of the classroom wall on graduation day. Reading about it or seeing pictures of it, simply doesn’t convey its power.

It’s a ritual that marks the full EMBA journey from beginning to end – with participants coming full circle in the place where it all began. As one participant described it: when she sat in the classroom on her first day at the school, surrounded by all those colorful signatures, she knew, “I absolutely had to put my own name on that wall.”

Over the years, the wall has become a tapestry, an electric tangle celebrating a shared journey and the realization of a dream. The wall also symbolically suggests the weaving of each graduate’s identity into the collective spirit of the school, implying they will carry its values and lessons with them far into their future professional lives – and also that they have left behind an enduring, literally indelible, impression.

Perhaps what makes the wall ritual most potent is that it embraces all three of the experiences humans long for: “belonging”, “becoming” and – in the sense of being woven into an ever-growing global creative business community, unlimited by time and space – “the beyond”. 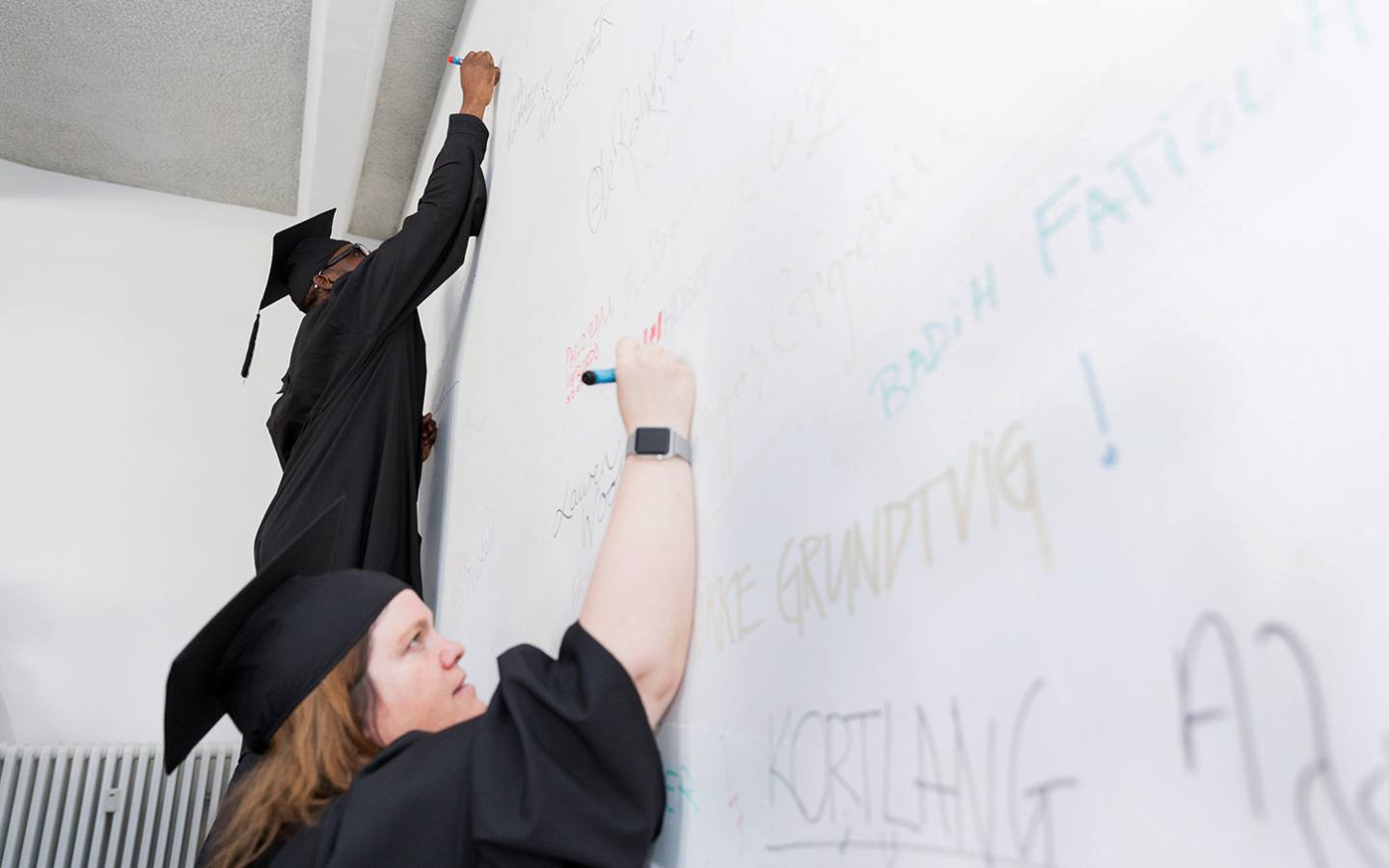 Our Response to the COVID-19 Pandemic
In Times of Degree Skepticism, 7 Reasons Why an Executive MBA is Pivotal in Creative Business
All articles »