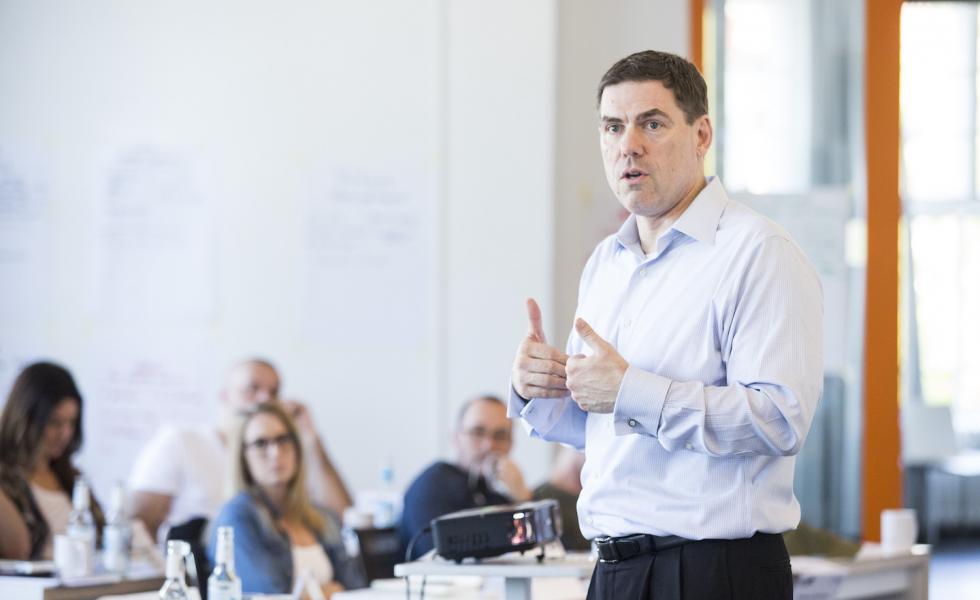 To open the 2017 Cannes Creative Leaders Programme (CCLP), participants from creative communication agencies from eleven countries identified what they viewed as the greatest challenges facing creative leaders globally today. Their shared conclusion – of the urgent need in brand marketing and communications agencies and other businesses for ‘reinvention for relevance’ – became a guiding imperative for the two-week programme. Pursuing both of those key words was a major priority of the week of creative business leadership theory and practical lessons in Berlin. Following the transfer to Cannes, participants continued to draw on key lessons from programme speakers and the wider festival in shaping their own strategic intentions and paths forward.

While many reports of the Cannes Lions Festival summarize overarching themes or trends from the event’s formal talks, awards presentations, and other sessions, most of the topics are already well-known to festivalgoers and industry watchers. Here, instead, are a handful of constructive tensions that emerged during the programme fortnight and can prove valuable for all creative business leaders.

Artificial Intelligence, diversity, the future shape of agencies, the wider and continuing shift in prominence from traditional agencies and clients inside the Palais to tech companies outside, and the continuing growth and expense of Cannes Lions itself were recurrent topics for discussion. Two announcements made during the festival itself highlighted some of these trends. The first, Amazon’s acquisition of Whole Foods, cast in relief the challenge to conventional branding and retail marketing mounted by technology firms. The second, raising questions about the festival’s status as well as alternative technological priorities, was the announcement that the Publicis Groupe would not participate in the festival or other such events in 2018 in order to focus on its internal AI initiative.

Contextual intelligence of these macro-trends is vital for creative business leaders, of course. In the CCLP, leading – if diverse – voices like WPP CEO Sir Martin Sorrell and NYU Professor Scott Galloway described global brand marketing and technology trends that pointed to radically different potential futures for agencies and advertising. At the same time, enabling individuals to find specific significance for these trends remains crucial. Thus when Grey Africa CCO Fran Luckin spoke about diversity, she started with general concerns about implicit bias before turning to a vexing personal leadership decision she’s faced: should she let women workers leave the office early to care for their children – if that potentially reinforces their cultural roles, has them effectively work a second job, and leaves men’s behavior unchallenged and unchanged? For every macro-trend, the challenge for individuals is to reflect and recognize why and how they matter locally and personally.

If reconciling global trends and potential local applications is one persisting challenge of Cannes Lions, a related one is making sense of the varied creative leaders who strut upon the festival stages. As potential role models, speakers in the programme’s closed-door sessions embodied proven leadership capable of both future-changing vision and pragmatic engagement with clients, collaborators and teams. Two such memorable sessions were provided by Tamara Ingram and Keith Reinhard. Ingram, CEO of JWT, used Michael Jackson’s ‘Man in the Mirror’ as a guide to being real with oneself and others. Reinhard, Chairman Emeritus of DDB and architect of the merger that produced the Omnicom holding company, similarly emphasized the interpersonal dimensions of the best leadership when paralleling the nurturing of creative people to the caring cultivation of plants. Even in the highest offices, the everyday leadership of people remained the core priority.

Others demonstrated how to combine broad strategic insights with practical if still far-reaching responses. Dana Anderson, CMO of Medialink but also a veteran of agency and client-side posts, opened her session acknowledging a shifting brand marketing landscape that she didn’t fully understand. So she launched a research project to map the new players and shared the results of how the collaboration with them today could work better. Looking at her own digital business, Isobar CEO Jean Lin spoke compellingly of addressing the inevitable ‘forces of decay’ that she needed to address as much as the ‘organizing principles’ and ‘liberating agents’ that she might find easier to focus on. That willingness to roll up one’s sleeves and act upon the unknown or the unfavorable elements of creative businesses and markets is an essential complement to the leader’s ability to formulate what are oftentimes more heralded overarching strategies and values.

The Cannes Lions festival has long hewed to traditional artistic notions of creativity. As I’ve written in the past, the awards celebrate what marketing anthropologist Timothy de Waal Malefyt observed are ‘artists who stand apart as innovative and original, and who also operate within the commercial necessities of creating popular campaigns.’ While both art and commerce are present at the event, it is the recognition of ‘ideas and their originators for artistic value’ mostly separate from business imperatives or "commercial interests’ of clients that remains the conspicuous official priority. That is not a timeless inheritance; it is an assumption that emerged among marketers in the middle of the last century and became solidified in the ‘creative revolution’ of the 1960s. Yet the insistent call to prioritize ‘the work’ over other considerations, be they business deals or technological advances or the growth of the festival itself, seeks to preserve an historically-specific, often Mad Men-era approach to creativity as unfettered artistic expression.

It is perhaps unsurprising, then, that some of the most galvanizing sessions in the CCLP explored successful efforts to update the how creativity and commerce work together. The digital revolution of recent decades has increasingly challenged long prevalent attitudes of creativity as art. Presenting their Paper tool, Colin Whitehead and Aaron Robbs of Dropbox shared research on creative collaboration and how new applications could better enable people to grow ideas. DDB North America CEO Wendy Clark offered an inspiring talk on how she led the reinvention of the agency model for McDonald’s in order to provide more value to clients through greater creativity. Perhaps most ambitiously, the visionary founder of R/GA, Bob Greenberg, described his restlessly creative organization, driven by a design sensibility and engagement with technology, and now operating multiple connected lines of business. For all, the commitment to integrating different forms of creativity with the evolution of technology and the exigencies of business served as the basis of success.

4. The thrill of the new and the persistence of beliefs

Cannes can be a playground for the exercise of cognitive biases. Confirmation bias, the ostrich effect, the backfire effect and more all play out to confirm and reinforce existing beliefs while ignoring or rejecting competing evidence or ideas. Anecdotes too often stand in for evidence. As iHeartMedia CMO Gayle Troberman put it in a discussion about the continuing disregard among marketers of the immense reach of radio, ‘There’s a huge bias among marketers for new, next, sexy and shiny.’ For an event dedicated to creativity, the exercise of core attributes of that activity – curiosity, engagement with difference, pursuit and delivery of novelty and utility – can seem oddly lacking. Even more disconcerting is the way that some vital change initiatives – say, around gender diversity – are held up by traditional agencies or businesses that otherwise appear unwilling or unable to adapt to shifting market conditions or explore fundamentally different business or social impact models.

This is not to suggest that every legacy agency or marketing organization needs to radically overhaul itself. Rather, the challenge is to recognize core beliefs and to be willing to take on whatever appropriate form of creative change. In some cases, this can result in what might appear incremental. Thomas Puckett, a Creative Strategist at Facebook Creative Shop, described the eventually far-reaching reinvention of L’Oreal from a traditional top-down luxury to a much more socially interactive premium consumer brand. Similar challenges confront individual creative business leaders. Lookinglass founder Charles Day spoke about being fearless – in this context meaning the consistent and candid understanding and presentation of oneself. For both business and personal leadership transformation, in other words, the idea is less to follow any single formula or precedent for reinvention and instead to recognize one’s own preconceptions and assumptions as the basis for remaining genuinely open to emerging conditions and then for courageously taking future action.

Cannes Lions can be a refuge – and, for many who stay away, an easy target – for provocateurs of various industry stripes. Some of these, ironically, question the awards, deal-making, extravagance, or superficiality of the festival while nevertheless attending in order to benefit from that very platform. Ogilvy UK Vice-Chair Rory Sutherland observed last year that the event is a place for Fisherian runaways, those who show off in order to find kindred spirits (or, to follow Sutherland’s evocative evolutionary reference more precisely, to mate). The important insight here is that Cannes enables different groups of kindred spirits to find each other and, in many cases, reinforce their disparate existing beliefs. Rather than a monolithic aggregation of global creative communication leaders, that is, the festival gathers multiple tribes of likeminded believers bound together by shared language and thinking about the present and future of creativity, advertising and brand communications. Indeed, it’s hard not to notice parallels between the arch divides and unwillingness to find common ground that define so many national politics and the reality of changing communications work and markets. If all politics is ultimately tribal and personal, so are the views of creative business.

The CCLP compelled participants to address the often conflicting views and values directly. If the closing assignment of the programme was to formulate individual strategic priorities for their agencies or businesses, the day-to-day interactions provided an opportunity to actively engage different perspectives on the changing brand and communications marketplace. In fact, returning to where we began, a central aim of CCLP was for participants to reconcile the broad, state of the industry trends being offered with the everyday, in-the-trenches problems that participants face in their own lives and work. In the 2017 programme, this led to strategic proposals ranging from an innovative talent recruitment strategy at a Riyadh agency to a new collaborative partnership model in Lagos, and from the combined value offer of data, creativity and distribution by a Netherlands agency to integrating the capabilities of multiple agencies in a mini-network in South Africa.

It is easy to be overwhelmed by Cannes – by the surplus of inspiring work, the larger-than-life figures, the scale of the event, the unrelenting energy of the long week. Important ideas and examples of the present and future of brand and marketing communication abound. The challenge for individuals is to engage more critically and (yes) creatively their experiences of the festival, from days in the Palais to nights on La Croisette, and determine why and how it matters to them and their own creative businesses. While the festival exists (at least in part) to inspire and instruct, it’s very easy for attendees to become passive admirers of great creative ideas, work and leaders. CCLP 2017 afforded participants the opportunity to remain active and purposeful in processing the array of viewpoints, visions, and examples. In doing so, the programme enabled participants to reinvent their experience of the festival and ensure its relevance to their own work and lives as leaders of the future of brand and marketing communications.