Re-imagining the Language of Creative Mavericks and Leaders 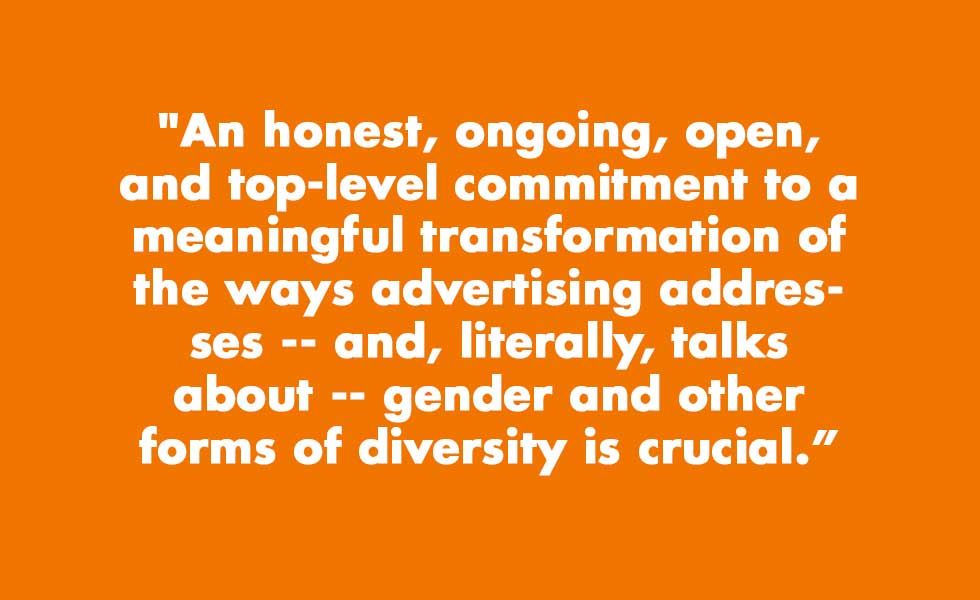 Over the past week, the advertising world has been roiled by the publication of a troubling and insensitive July 29 interview by Business Insider with the senior industry creative figure, Kevin Roberts, then the Executive Chairman of Saatchi & Saatchi and member of the Management Board of the Publicis Groupe. In an earlier post responding to Roberts’ interview and assertions he had made elsewhere, I explored the misguided connection he drew between political incorrectness and creativity. In this follow-up, I would like to extend those thoughts to discuss the subsequent resignation of Roberts, his statement about what has transpired over the last week, and some preliminary ideas about how the industry as a whole can move beyond the deep-seated attitudes and decisions toward gender (and other) diversity that were illuminated by the episode.

My initial comments focused on Roberts’ language and the sense of exception from the responsibility of leaders to redress outmoded attitudes toward gender diversity that language conveyed. Specifically, the implications of an earlier assertion by the advertising executive that he was a “maverick” and that “nothing was too politically incorrect” appeared to cast light on his decision not to spend “any time” on gender issues. Put directly, the more far-reaching question was whether the choice to hide behind the label of being a maverick or a creative amounted, in fact, to a death knell for the real creativity that comes from challenging one's comfort levels? After all, for many, such self-labeling is a defining aspect of being part of a creative organization or industry and can confer status and even a sense of entitlement. However, rather than opening out one’s curiosity and imagination to the world, linking Roberts’ words suggests that the habits of mind and heart of a professed “maverick” or “creative” might as readily entail a selective and self-affirming engagement with some creative pursuits and aspects of social or professional reality but produce blindspots for others.

It is not merely an academic preoccupation to dwell on leaders’ words in this way. Language has the power to shape cultures, agencies, industries, and fields of work and workers like the “creatives” in advertising. Terms like “creativity,” “innovation” and “disruption” are but the most familiar examples. A couple years ago, I wrote a short piece about the “language bubble” that has emerged, largely from Silicon Valley but also in marketing and communications industries, around the frequently undifferentiated overuse of the terms “innovation” and “creativity.” As I wrote then, the repetitive deployment of these words tends to encourage self-reinforcing generic communications rather than to help solve specific problems. When speaking them, we should instead strive to understand better “how creativity and innovation, even with all their inherent messiness, disorder, and indirectness, need specific situations and contexts in order to flourish and effect meaningful change. Innovation and creativity, writ large, are not strategic silver bullets.”

In his own statement about the interview imbroglio and resignation, Roberts turned to another safe and overused turn of phrase in creative work: “’Fail Fast, Fix Fast, Learn Fast’ is a leadership maxim I advocate,” he begins, before writing that he “failed exceptionally fast.” He then apologizes for the “upset and offense” caused by his “miscommunication” and announces “bringing forward” his retirement to September 1 “so that we can all move forward.” The statement closes with a call for “reflection” on the recent outcry and the needs for “new thinking, frameworks and measures” “to make more rapid progress on diversity in all its forms, in all professions and occupations.” Setting aside the matters of what his apology is for and the status of gender diversity in the advertising industry specifically, Roberts’ invocation of “failure” begs the question of what lessons – beyond generic reflection and universal equality – the episode has provided him. “Failure” should not be celebrated for its own sake; it has value only if it’s coupled with and generates deliberate and specific learning.

If the value of any failure is in the ensuing learning, that learning needs to find its way into action. An individual’s resignation – or, rather, an eight-month change in “retirement” plans – is undeniably a concrete action. Yet as several critics pointed out, allowing Roberts to resign rather than firing him can be seen as a missed opportunity by the Publicis Groupe to make a strong public statement about its intolerance of outmoded views of women and diversity in its ranks. Industry gender equality advocate Cindy Gallop’s response to Roberts’ resignation was again on point. Not only did she ask for the holding company to make a more direct statement of its own values relative to Robert’s departure but challenged its CEO, Maurice Levy, to attend and speak on the topic of gender diversity at The 3% Project conference, which is dedicated to improving gender diversity in advertising, in New York in November.

A speech might seem to invite only more words but Gallop’s challenge to Levy also emphasizes the importance of symbolic as well as substantive action in changing attitudes, beliefs and mindsets. Particularly for an industry build on messaging and communications, the combination of symbolic and substantive action as an outgrowth of learning is crucial. While outlining and implementing concrete steps toward more inclusive and diverse hiring, promotion, retention and community building is essential, in other words, so are continuous and explicit statements of commitment to change by the industry’s senior-most leaders. Roberts’ original words were especially disturbing, in part, because they so summarily dismissed gender inequality. Without honest and consistent prioritizing by leadership, the process of re-educating employees about gender and other diversity shortcomings becomes all the more difficult.

Attitudes and decisions, symbolic and substantive action all turn in ways on the language we use to shape and describe them. That so much of this language revolves around creativity, its spirit, practitioners, and processes, can blur and complicate the discussions of concrete realities and the urgency of making practical changes in the workplace. How can embracing multiple perspectives, novel ways of seeing and thinking and feeling, and challenging convention and orthodoxy – which are all seen as central to creative work itself – be extended to the leadership and (re)organization of these industries? An honest, ongoing, open, and top-level commitment to a meaningful transformation of the ways advertising addresses – and, literally, talks about – gender and other forms of diversity is crucial. To begin, more genuinely creative leaders can help by bursting the protective bubble of industry ‘creative’ language and choosing more carefully the words they use while speaking to the truth of persisting inequality in proposals and plans for greater diversity and in lectures and interviews that drive positive change rather than seek to preserve the past.