Political Incorrectness is Not a Standard for Creativity 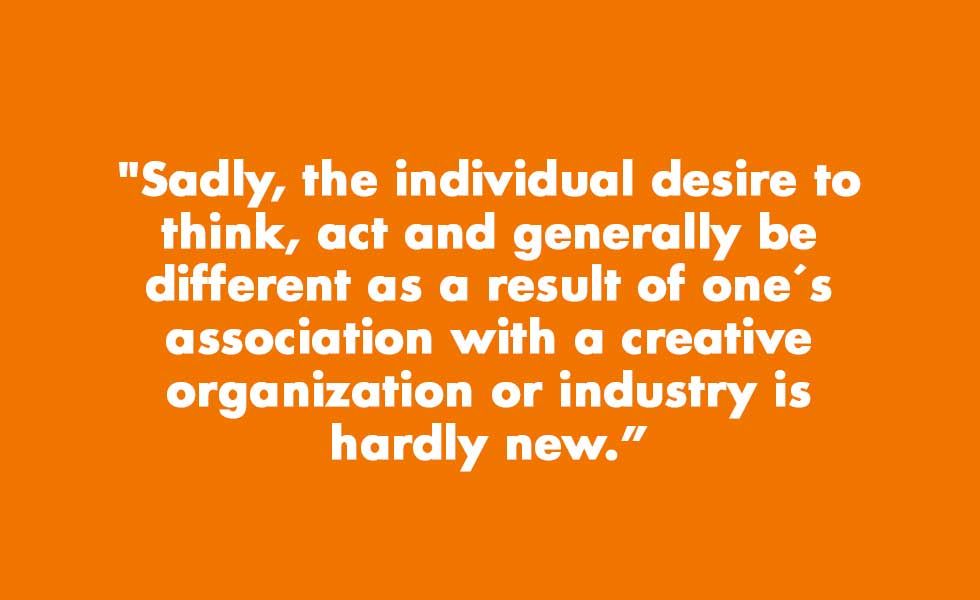 Amidst coverage of Kevin Roberts’ remarks last week about the gender equality debate in advertising being “over” and women lacking “vertical ambition,” the Financial Times’ Matthew Garrahan stood out for drawing direct connections to widespread beliefs about creativity in the industry. His August 2 piece opens, in fact, by recalling some earlier comments made by Roberts to the FT. “Nothing is too politically incorrect” at Saatchi & Saatchi, the agency’s Executive Chairman said in 2014, “because we are creative mavericks and vagabonds. That’s our DNA, our heritage, our legacy.”

Garrahan goes on to recount the gender-based scandals of Roger Ailes at Fox News and Gustavo Martinez, who stepped down as CEO of the J. Walter Thompson advertising agency in March. He then explores some of the further background, incorporating insightful comments by two advocates for greater gender equality in advertising, Kat Gordon of The 3% Conference and Cindy Gallop of IfWeRantheWorld. Gallop was named by Roberts in his interview for seeking a “soap [box]” by speaking out on what he perceived as a non-issue. Overall, the article provides a useful summary of the Roberts’ incident and responses as well as some deeper issues related to achieving greater management diversity in media and advertising industries.

However, it is the title of the piece, “Creatives find maverick modes out of date,” that makes a more unusual and noteworthy connection. (NB: This appeared in the print edition of the Financial Times; online at FT.com, the title was “Media mavericks answer for Mad Men modus operandi.”) Linking the outmoded ideas of white male leadership with the contrarian heritage and heart of creativity is important because it cuts to the core of how some in the industry continue to define themselves. In making that connection more explicit, it is important here to underscore that the suggestion refers to some in the industry. Many free-spirited and heterodox creatives and creative leaders are committed to using their talents and imagination to effect positive change and bring greater equality to the industry and wider society. Yet by drawing together Roberts’ past and current words, Garrahan highlights the ease with which advertising agency privilege – disproportionately white and male – can be sustained through superficial use of some of the industry’s defining language and values.

Sadly, the individual desire to think, act and generally be different as a result of one’s association with a creative organization or industry is hardly new. In 1969, advertising icon Bill Bernbach raised a similar concern, observing that, “I worry about everyone trying to be different for the sake of being different. People are coming in and mistaking the façade for the real thing.” Five decades later, “creativity” has become for many a talismanic word not only for innovative differentiation or problem-solving in business but for personal expression, lifestyle, and politics unfettered by sensitivity to others’ diversity, industry reality or social mores. As with Roberts, this is sometimes generational. More often, it is arguably the outcome of a misguided belief that creativity, as a font of truth or beauty or the human spirit, carries with it a special exemption from ordinary rules of respect or expectations of equitable interactions.

It is in such a sense of exemption or, more plainly, entitlement that the language of gender inequality and creativity come together. The broad constellation of attitudes and assumptions about what it means to be a successful creative leader today still turn as often on free-spirited Romantic notions of creativity as on heroic images of the white male leader. To be clear, in saying so, I believe the focus should remain the deliberate, transparent and sustained increase in diversity in agency leadership. Gender diversity and equal opportunity, as Gallop commented in response to Roberts’ claims, are particular priorities. But we should also take care to recognize how a simplistic understanding of creativity, often distilled into clichéd talking points, can make outdated attitudes toward women and other traditionally underrepresented groups all the more toxic.

Political incorrectness is not a standard for creativity – particularly when brandished as self-description. While provocation has its place and role, strident assertions of individuality or originality or path-setting can too easily become self-serving justifications for all manner of speech and behavior. As the Kevin Roberts interview last week showed, embracing the maverick role can also eventually betray a multitude of retrograde insensitivities and blindspots. A key argument of gender equality advocates like Gordon and Gallop is that increasing diversity promises to benefit agencies and the industry as a whole by expanding their innovative capabilities in a rapidly changing and fragmenting market. As part of the effort to move beyond outmoded attitudes toward gender, that work should include updating hackneyed thinking about creativity that can still be used to justify leaders’ entitlement and sustain inequality.

UPDATE: On August 3, the Publicis Groupe released a brief statement announcing the resignation of Kevin Roberts. It did not cite any specific reason or otherwise mention the larger gender diversity discussion of previous days.