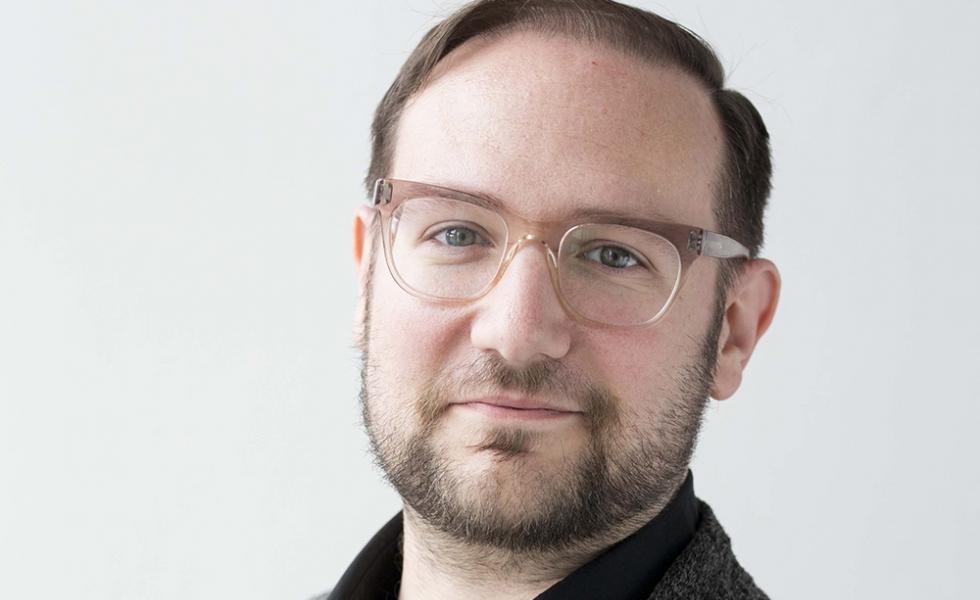 Erik Spooner made a name for himself with his innovative work on the seminal New York magazine Elmore, he then went on to become the industrious Creative Director for Advertising Age. After winning the Lürzer's Archive Scholarship, Erik joined our latest Executive MBA class to expand his horizons and deepen his understanding of creative leadership. We picked his brain about his influences, the future of print advertising and how he hopes the global Executive MBA program will shape his career.

Let’s start from the beginning. What led you to a career in publishing?

The short version of this story probably starts with my family. My mother, her mother, her sister—all of us, really—like having magazines and newspapers around. I grew up with a veritable newsstand in the house at any given moment. I think that subconsciously had a very deep effect, and I have always loved magazines. Time and Newsweek were always around. When my mom would take me grocery shopping with her, I’d often plant myself at the newsstand in the center of the store and just wait for her to finish while I browsed. It happens that it was also a golden age for magazine media, so I looked at everything from Omni, Discover, Rolling Stone or Musician to GoodHousekeeping, House & Garden, Gourmet or GQ to keep myself entertained.

My career was accidental, though. Initially, I started working for a local custom publisher in Nashville, my hometown, when I was still in high school. I had an interest in technology from a young age and became adept at using and managing networks of Macs, and as the web took off, I found ways to learn more. That landed me an internship managing technology for the firm, Hammock, where I worked until I graduated and moved to New York.

At Hammock, I was very impressed with the way we made stuff, even if I didn’t really understand it very well then. I met and got to know an extraordinary group of journalists, designers and strategists, who were both good at what they did and quite innovative. In 2000, we were managing large web content accounts for big clients, which most of our competition didn’t really engage in or understand in those heady days before the first dot-com bubble burst. Reading an old profile of the firm’s founder (and my boss) Rex from 1996 in Folio: magazine, you can look back and easily see how far ahead Hammock was for their time. They were channel and platform agnostic when channels were still something you flipped on a TV and a platform was where you waited for a train.

As time went on, I got to know the various folks and realized my work had me situated at the center of a lot of what we did, but I wanted to be working on the making part more. The art department—a couple of people particularly, including our Creative Director and the art directors—really took me under their wings, and I was very interested in what they did. It was a direct result of those relationships and others I built around them that led me to design and eventually into art school. Since then, I’ve interned in, freelanced for, worked in and led art departments at titles owned by the big international publishing houses to small start-up shops, with a few stops outside of publishing in between.

No matter where I have worked, however, one theme has remained constant: journalism is at the heart of all groups I’ve worked in, even if it was not always what the organization explicitly did.

The publishing industry is facing difficult times. How can we improve the business without sacrificing quality?

That’s the million-dollar question. I think it might be a big part of what brought me to BSCL, and it’s going to require, I think, a real shift in how we understand the business to function. Right now, we’re watching dramatic change occur as consumer behavior around traditional media channels alters and fragments, while executives with channel expertise scramble to figure out how to bring the audiences back. Which, when you think about it, is too bad: What an incredible lost opportunity to innovate for audiences and build new channels entirely. Not to beat up on any particular profile, but it’s therefore no surprise to me that executives who are print logistics, distribution and manufacturing experts have no flipping clue as to where we’re headed next.

Maybe focusing more on making stuff people want rather than stuff we want for them, is a good lesson to take away. That’s not to say I think magazines or publishers at large don’t offer their audiences worthwhile content; but I do think we could work harder than we have been at making that content and the package it’s delivered with, more valuable to audiences on any given platform or channel.

So I reject the notion that the work we make in this business no longer has value in our world, which is what we keep hearing. “Print is dead”—how long have we heard that? As it was recently pointed out to me during a presentation at work, Egon says that to Jeanine in the original Ghostbusters movie. That was 1984! Obviously, it’s time to get past that. The “fake news” nonsense coming from our current discourse doesn’t help either, but the trouble presented by false information presents an opportunity, too. And therefore, we need to take a hard look at how we’re currently keeping the businesses afloat, which feels a lot like we’re continually bailing buckets of water off the Titanic. Whatever the case, I’m fairly certain we’re going to have to try new ways of creating opportunities for our audiences and clients to learn something and connect with one another.

It’s safe to say I didn’t actually answer the question here, but then again, I also hope that’s what a few of us are going to start chipping away at in Class 20. I’m far from the only media type in the group, and we’re all pretty excited about what the future might be.

How has the transition from print to digital affected your work, and how can the industry better adapt to new technologies?

The decline of the print journalism industry has created a fundamentally different world than the one I started working in at the end of 1999. Obviously, we had Macs and Quark and the basic outlines of how print production happens hasn’t changed much, other than increasing a bit in automation and efficiency. The real change has been in creating content more quickly for media that have less permanence or impact. Commoditization has had a huge impact in that, especially. Information used to be a valuable business to be in; today, it’s literally worth no more than the paper it’s printed on. Using information to build experiences is something else, but that gets awfully close to a different business, like TV, and frankly, they’re not really in better shape, so that’s not a great model to emulate.

When I started working in consumer magazines, we had armies in art and photo departments, and they worked exclusively on printed product. That was 2004. Today, everything is lean and mean, and you are creating and sourcing solutions for web, video, print and event delivery channels every day. At most publishers, if this isn’t the daily experience, it will be soon. For perspective, the art and photography teams at Us Weekly had on the order of 20 people working in full-time positions at that time. After their sale to AMI is complete later this month, that number will look more like a half-dozen.

The new media kids on the block, like Vox or Buzzfeed, organize their video, photo and design teams around internal agency-like studios. Centralizing these groups has become increasingly common, and will continue. The toolsets have almost entirely converged, and frankly, there’s no reason our creator teams shouldn’t either, which is what excites me the most about what we do. For the first time, we can really build teams that work together to execute a story in various ways: the long-form print piece; its snow-fall web execution; the social assets that will be the quick-hit headliners.

The flip side of that is a little grim. It means that the extraordinary specialist talent we’ve spent a century building a huge industry around, and which has had immeasurable impact on our culture—advertising and journalism, including print creative directors, photography directors, image researchers, print page designers—fit in that landscape very differently and the actual money to pay for all that work is tremendously less. That’s both a loss for our craft, and a great devaluing. I’m convinced that if we leverage all that talent into crafting new storytelling methods there will ultimately be great opportunity to get new tricks out of the most talented among us.

And it’s not to say those old skills aren’t valuable. I think a design education offers a lot to help with that exact problem, and can inform all those channels and how to best exploit them for your audience. But that transformation, which is still highly underway, is getting steadily closer to concluding with each passing day. That’s a seismic shift in how we make journalism, and all signs point to a future where there will be less room for people, and those people will have to make more stuff.

​How will the Lürzer’s Archive scholarship help you realize your goals?

In short, I’d probably be unable to join the program without it. But I also understand the business Lürzer’s Archive is in, and take the goal of finding a new way forward for their audience and audiences like theirs quite seriously. The work they have honored, and the way they have honored it, has lots of value for that community and has built a comradery that’s highly unique. In media speak, their “engagement” is through the roof—something I both admire and want to help us all figure out how to monetize again.