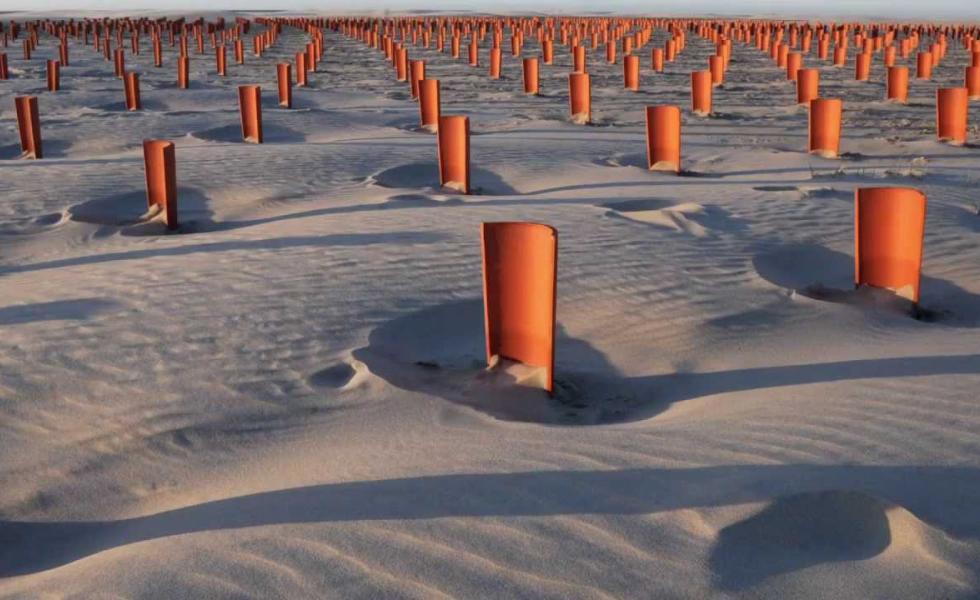 What happens when you place the inventor of mammoth-scale landscape art in front of a room full of seasoned creative business minds in week-two of an intensive Executive MBA module? The result is the kind of anticipation usually reserved for World Cup fixtures and Game of Thrones finales. Joop Mulder is a landscape artist and the founder of Oreol Festival. He is also the Creative Director of Sense of Place, an ongoing branch of the festival which uses the natural landscape of the Wadden islands to create massive explorative installations through which the audience can see, hear, and smell the beauty of the island, and how the landscape shifts over time.

Working with landscape artists, sculptors, architects, and environmental scientists, Mulder’s work ranges from imposing, colourful manmade structures which contrast jaggedly with serene colour-scape of the island, to geographical art which relies solely on the natural landscape to give it form. Waiting for High Water is a statue of two five-meter high women made out of welded bars, standing in brutal industrial contrast to the sea over which they look. Windwerk is an installation inspired by Escher in which the geometric landscape of marram grass fields slowly transforms into a dune landscape. The natural force of the wind is crucial to its formation.

Watching time-lapsed footage of his works as they are battered by wind, seas, and human footsteps, the effect is awe-inspiring. From a leadership perspective, it poses massive questions about managing huge teams, of actualizing vast artistic concepts, and of doing so in a way that incorporates and benefits the local community through culture, tourism, economics, and environmental awareness. In a classroom of CEOs and Creative Directors, many of the questions posed to him on the day were unsurprisingly practical.

How do you go about proposing such a potentially invasive project to local government? How do you gain funding and demonstrate value to the local economy? How has your artistic approach changed throughout digital adoption?

Listening to Mulder speak, there are many traits which can be applied back to a creative business context. It’s fascinating to see how these are applied without the traditional framework of the agency or start-up. Both his work and his creative process do two things which are inherent to the process of any successful creative leader; two things which can be difficult to manifest within a business framework, and which are ultimately antithetical to one another. Mulder’s work both pauses and disrupts. It both demands repose and embraces chaos.

Looking at pieces such as Three Points of the Compass, it’s easy to see this conflicting process at work. As a place to rest and take in the view of the surrounding area, it certainly invites the viewer to pause and be at one with the sands and sea. In this same moment the viewer is isolated, in a landscape created by forces totally beyond their control. Chaos is exposed.

Similarly, Mulder’s project management has demanded that these two opposing forces remain constantly at play. Like any business idea, Sense of Place, has required a broad look at the market into which it’s being sold. It requires regular pauses to take in the inspiration of the natural world, and the slow weaving of structural planning to make this idea a reality. Ironically, Mulder explains that it is often when working with younger people that he must train them to unlearn any constrained line of thinking, and adopt a fresh perspective on getting from A to B. His process also embraces chaos in a way that is undeniable – if you can’t change the moving of the tides, then you have to embrace them. The success of each project depends also on the chaos of human thought, brought to life by collaborative thinking and co-creation.

Above all Mulder’s work taps into a higher purpose beyond innovation which illustrates the social power of creative leadership. His work juxtaposes the powerful and stark beauty of natural landscapes against the very real impact we have on it as human beings. It exposes us to the tangible effects of human life and to our responsibility to make real changes to protect the environment. It also brings together community, by embracing local culture and benefitting the economy through tourism. Hearing Mulder speak about the growth of Oreol festival year in, year out, it is clear that every local community member feels responsible and connected to the project, in a way which transcends age groups and audience segments. Sense of Place captures human attention by exposing them to something as massive as Mother Nature, in a way that dismantles our own perceived hierarchies. When asked about the impact of digital transformation, it is clear that this has been yet another chance for Sense of Place to ride on the coat-tails of chaos. It is physically impressive, but also hugely impactful through digital channels, (as we experienced throughout the class) thus bridging the geographical gap which can often stifle true conversation and progress about the environment.

When we remove the organisational and academic structures in which many of us learn and unlearn throughout our professional lives, the purity and power of great creative leadership is unveiled. Certainly, the beauty of Mulder’s work through Sense of Place captivated our classroom to the point of pin-drop silence. But it was the faith to make his vision a reality through vast organizational planning, agile leadership, and the embrace of natural and social forces which truly resonated with our MBA class.