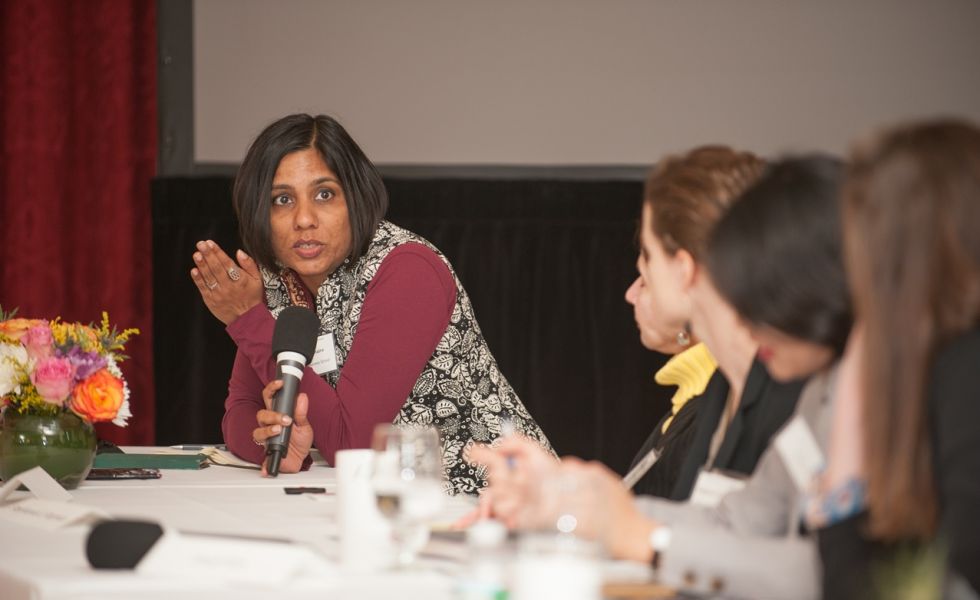 Mukti Khaire is the Girish and Jaidev Reddy Professor of Practice at Cornell Tech and the Cornell SC Johnson College of Business and a visiting faculty member on the U.S module of our EMBA program. Her latest book Culture and Commerce: The Value of Entrepreneurship in Creative Industries examines the intersection between business and culture and the role of intermediary the entrepreneur plays. We dove into the topics she wrestled with in Culture and commerce and discussed the future of the entrepreneur.

Central to the book and to the cultural markets you describe is the figure of the intermediary. What do these individuals or organizations do and why are they so important?

I define intermediaries as entities (firms and individuals) who do not have a direct financial stake in the sales of a cultural good, that is, neither a higher perceived value of the good nor a corresponding increase in sales revenues directly affect the revenues of intermediaries. Nevertheless, intermediaries’ discourse contributes to consumers’ and others’ understanding of the value of the good (thus, they are intermediaries for meaning of goods, not for the physical goods themselves). Organizations such as schools, museums, trade associations, and specialized trade or consumer publications, as well as the individual critics and reviewers who write in these publications are all examples of intermediaries. Given their lack of direct involvement in economic transactions (buying and selling of the goods) and the resultant absence of vested interest in getting consumers to buy more goods, intermediaries tend to have greater influence than producers in shaping consumers’ preferences and on the perceived value of goods in the market. Especially in the case cultural goods, despite not being actual creators (individuals who create cultural goods – authors, artists, etc.) or producers (firms that have a direct financial stake in the sales of a cultural good) – without intermediaries’ evaluation, explanation, and endorsement of complex cultural goods in the market, consumers would find it difficult to understand them and therefore be less likely to buy them.

Two properties – independence and expertise – are essential to establishing and maintaining the influence of intermediaries in markets for cultural goods. Their independence ensures that intermediaries remain objective and unbiased in their evaluations and endorsements and do not receive direct payback from producers in return for their positive evaluations. Expertise among intermediaries is necessary for the proper evaluation and explanation of complex cultural works. Imagine an untrained individual, writing positive film reviews in exchange for compensation – quite correctly, such an individual ought to have no impact on consumers’ perceptions of the film, due to her lack of credibility and objectivity. The existence and perceived relevance of these properties are eroding in today’s world, as described below, to the detriment of society.

Your opening chapter insightfully draws together the worlds of business and culture. Please share some of your thinking about how they are related.

As I describe in the opening chapter, far from being definitive and transactional means to an end, markets are, in fact, influenced by factors other than the purely economic or rational. The value of goods is thus shaped by prevailing social and cultural norms and beliefs about what is appropriate and desirable – that which is socio-culturally desirable will be more valuable. This process is most clearly visible in the creative/cultural industries, because creative works such as art, books, music, and fashion have greater symbolic than material value. For example, readers value books not because of the physical materials (e.g., paper and ink) that go into the writing and publishing of a book, but because of the ideas that the book symbolizes.

I use the 4Cs framework to simplify this conception. Objects that are sold (commerce) in markets but whose attributes do not align with prevailing cultural norms of appropriateness (culture), will not be desired nor bought by individuals (consumption) until the discourse of producers and intermediaries (commentary) results in changing cultural norms so consumers are convinced of the appropriateness, desirability, and therefore, the (social and economic) value of the object. It is thus that business (commerce), in the process of trying to create a market for new cultural goods (which are, in essence, physical manifestations of new ideas), can effectively achieve cultural change.

Could you say more about the role of entrepreneurs in the ongoing evolution of cultural economies – and how it differs from more familiar conceptions of entrepreneurship?

I define entrepreneurship as the process of bringing new goods to markets, or, by extension, as the process of creating new markets (that is, the businesses described in the last sentence of the response above). Under this broader than usual definition, entrepreneurship is not the limited purview of new ventures, nor is it restricted to creating new goods and/or selling them. Rather, existing firms that produce new goods for the market can be entrepreneurs and so can intermediaries, who contribute to conveying the meaning and constructing the value of the good for the market. I call these market-creators pioneer entrepreneurs. To create a market, pioneer entrepreneurs must help consumers understand the value of new and original—even potentially subversive—ideas and goods so that consumers buy them—literally and figuratively. Pioneer entrepreneurs accomplish this by generating an understanding of the attributes, quality, and therefore the value of the good, thus making the works comprehensible, meaningful, and desirable. Thus, the discourse that educates consumers about the good is as essential to the market as the good itself, which is why intermediaries, who make no contribution to the production of the good, may still be pioneer entrepreneurs—they are involved in the “production of belief” in the value of the product.

The chief proposition of this chapter, and indeed the premise of this book is that creating a market for creative works—books, paintings, music, performances, design in the fields of architecture and fashion, films—has the potential to initiate broader cultural changes (i.e., changes in social norms, beliefs, and ways of thinking) due to the nature of creative works and their creation as well as the functioning of markets (for these goods). The introduction of new goods in a market, necessitates new commentary that presents new conceptions of meaning and value, which, if accepted, change our preferences and beliefs. Further, because radical new cultural goods are new ideas (not just new material products) creating a market for them brings about and reinforces a change in cultural norms by changing how people think about what is valuable. The successful creation of a new market by pioneer entrepreneurs, suggests that cultural change has occurred.

You close your book by addressing today's world of digitalization and globalization. How do you see the dynamics and evolution of creative industries heading into the future?

Digitalization refers to the rapid uptake of the Internet and other digital media for creation, commerce, and communication. Globalization is the opening of previously closed economies, which has led to widespread economic development and increased interest in these countries from Western firms. Digitalization and globalization have led to disorder in the creative industries, and have challenging consequences for the functioning of established entities, while they have had mostly positive implications for entrepreneurs, pioneering and otherwise.

Most strikingly, the interaction of globalization and digitalization has yielded a particularly fertile ground for entrepreneurial opportunities because the digital medium reaches across geographical barriers and enables both commerce and an increased volume of commentary. The opportunities generated by rapid globalization are strengthened by the concurrent trend of digitalization and vice versa. If the Internet did not make cross-national transactions so easy, it would be far more difficult for cultural goods to be sold in geographically and culturally distant markets; conversely, if consumers were not increasingly aware of and interested in countries such as India and China (as a result of their recent rapid economic development), there would be no markets for goods from these countries in the Western world.

These developments have had significant impact on all members of the market for cultural goods. Today’s aspiring filmmakers can use digital cameras to make films relatively easily; designers, musicians, and singers can use a variety of online platforms to post their work and build an audience; and writers can self-publish online to reach readers. In addition, the creators of works that require a significant sum of money to create and/or distribute—for example a film, a line of fashion apparel, or a large-scale sculpture—can connect with willing customers/funders/patrons via several Internet ‘crowd-funding’ platforms. Finally, once they have created their works, creators can harness the services of online marketplaces. Thus, the twin forces of digitalization and globalization have jointly changed the everyday lives of artists.

With these changes, these developments might seem to have rendered producers and intermediaries obsolete, since creators can directly take their creations to consumers. In fact, given the proliferation of works reaching consumers, the filtering and evaluation performed by producers and intermediaries have, in fact, become even more important. In the case of intermediaries, hyperlinks and affiliate revenues threaten the independence of digital intermediaries and user-generated content on websites that sell and comment upon cultural goods, undermines expert commentary. Although the ease of creators’ direct access to consumers (without needing producers), and these developments in the world of intermediaries are generally hailed as positive changes, it is important to raise a red flag and issue a call to consumers to be more cognizant of the skewed incentives created by these changes and to remain vigilant about the bleeding of various parts of the value chain into one another.

What are the major lessons of your research for leaders of creative businesses?

1. The world of creative industries is full of entrepreneurial opportunities for cultural impact as well as financial benefit, as long as the structure and functioning of these industries are well understood.

2. In a rapidly-changing world, it is still financially worthwhile and culturally meaningful to hold on to some fundamental, seemingly arcane building-blocks – such as maintaining independence and expertise in intermediaries, and knowing that market-creation, not just marketing, is important for producers – of the way cultural markets operate.

3. Creative works of all kinds are central to our humanity and civilization and leaders of firms in creative industries bear the responsibility of bringing these to members of society. This awareness should be the guiding force behind all decision-making by these leaders.