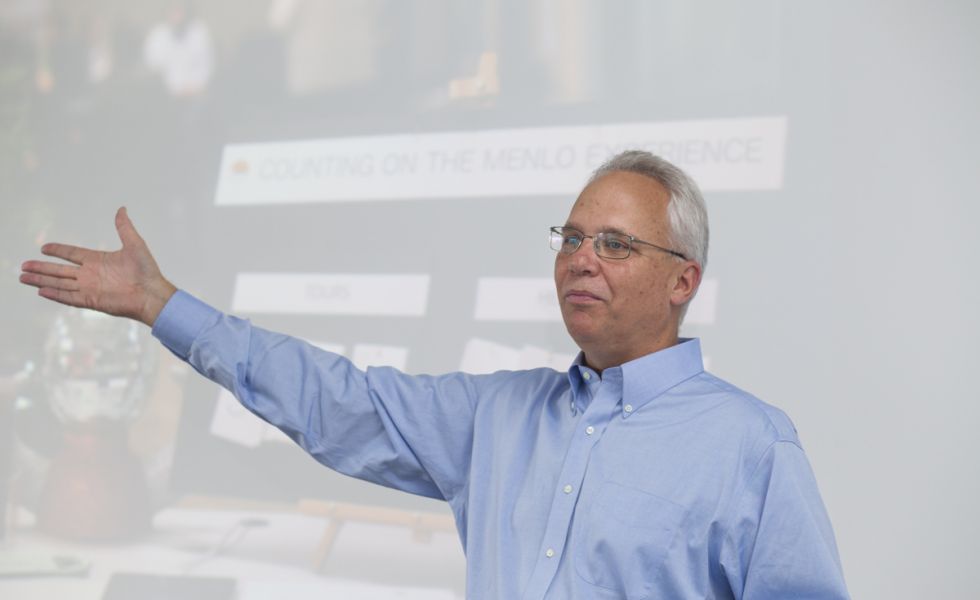 Last year, more than 2,000 people came from around the world to visit Menlo Innovations in Michigan, USA. The company has set out to change the way in which we measure success and in doing so, implemented business values “based on joy”. As a guest speaker at the Berlin School of Creative Leadership, Richard came to talk about his experiences and the book he just wrote, Joy, Inc.: “Fight fear, embrace change, run the experiment.”

1. What inspired you to take action in the first place?

I had always aspired to working on something that was much bigger than me, but having worked all these years in my industry, I was losing that inspiration. I think for me it was a long tough journey through my long days of disillusionment. What inspired me to take action at that time was to re-ignite that flame inside of me, that was going out and that really propelled me to action. It was a moment, a very particular moment in my life where I made a decision: the decision to reinvent myself and in some ways reinvent my entire industry.

2. Looking back now, what would you define as the greatest challenge/ obstacle you've had on your path to success?

I think my greatest obstacle was the same one that we all face. You know, these moments of either just before we fall asleep or just after we wake in the morning - we are often filled with these inspirational thoughts of something we want to do in the world and then your day begins and they all evaporate away and you just go on to your normal life and you just do what you've always done. Many would look at what I've done and say I took a big risk. I look at it just the opposite. What was at risk for me was myself – so I was not running towards risk, I was running away from risk. Once you’ve made that decision in your head that the risk of staying the same is far greater than the risk of change – you’ll start racing towards change. And that's really where I found myself.

In 1999 it was just like Boom I know what I'm gonna do. And here it is 15 years later and I haven't stopped. I think everyone of us has these potential moments. I probably had many of them before that, but in those days I never answered the call - and in this particular moment I did. And of course that made all the difference.

3. What do you think is the biggest misconception we have about leadership today – or do you maybe feel like these misconceptions have always been the same?

I think the biggest disconnect around leadership is the difference between of being a leader and being a boss. A boss tells people what to do, a leader influences direction. Leadership only works if you can engender followership. If you are a leader and you go out for a walk and you turn around and there is no one following you, you are just out on a walk, you are not leading anybody anywhere. I think the most important thing for a leader is not to establish authority, or power, or position or title- a leader is to tell a story that connects with the hearts of the people you are trying to lead. So that they just want to follow, they want to be there with you, they want to take that journey with you. Not because you know exactly where you going, but because they want to be on that journey as you are going in that direction.

4. Why do you think we do have so much trouble with human values in business?

You know, I think the world has convinced us that there are these goals that we should be striving for to be successful. In the United States we refer to this as the American Dream. Author Shawn Achor, who wrote a book called The Happiness Advantage, talks about this: He says we really have the American Dream backwards. The American Dream is: Once you are successful you will be happy. And he says it's just the opposite. He says, No, once you are happy you will be successful. If we believe, once we are successful we will be happy, we set a goal for ourselves: Maybe it's a position at a company or a certain amount of money per year or certain amount on your bank account… And as soon as you have achieved that goal you don't sit back and say „Ah, I made it.“ You just set yourself off for another goal and you end up never being happy, because you are always pursuing another goal. My journey to leadership has been a journey of self-discovery, of what makes my heart sing. It couldn't be personally just selfish, but there had to be a bit of a selfish component to it. I wanted to built the kind of place, I would want to work – and hopefully it would be also a place other people would want to work as well, that was going to be important for my journey, but this was not about “Oh if I go do this I’ll be incredible financially successful, and then I'll get to do whatever I want.” Life is way to short for that.

5. After all your success and the acknowledgements you've received, is there something that still surprises you?

I think for me the very joyful thing about the position I find myself in now is that I get pulled into these conversations like I did this morning at the Berlin School. This is an incredible privilege to be here. To be with those people, who are doing themselves amazing things in the world, to meet the people who created this School, and I think Ok, have I just made a whole new set of friends here in Berlin, Germany? To meet people that are on the same path, on the same journey, had different experiences but with whom you might walk along for some time? You know, that is a privilege, it's an honour, it just makes life more interesting and more fulfilling. The depth of relationships I make with people I've met around the world now is just wonderful. It's a blessing. I don't know how else to describe it.